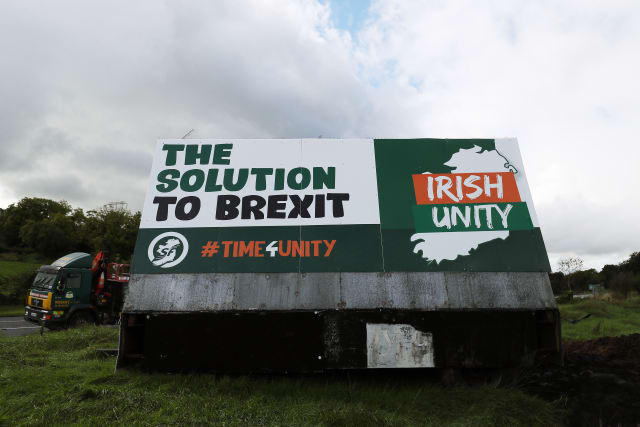 A Sinn Fein MEP has signed off from Brussels by insisting Brexit has made the time ripe for a vote on Irish reunification.

Following her final speech in the EU Parliament, Martina Anderson said “there is no good Brexit” but added it had “reinvigorated” the debate around unification.

Speaking to the PA news agency, she said: “We have been arguing for and discussing and planning and preparing for Irish unity for a long time but there’s no doubt that Brexit has invigorated that conversation.

“We would not be getting dragged out of the EU against the democratically expressed wishes of the people if it were not for partition.

“So partition is a disaster.”

A poll conducted on behalf of Conservative peer Lord Ashcroft published in September last year showed just 46% to 45% of Northern Ireland citizens would vote for reunification.

The figures break down to 51% to 49% when those who said they would abstain who did not know are excluded.

Despite that, the percentage of the electorate voting for nationalist/republican parties remains well short of 50% and actually fell in the December vote, as support for centrist non-aligned parties like Alliance continued to surge.

When asked if, having witnessed the bad feeling and divisions sparked by the narrowness of the Brexit vote, she would be concerned at a unity referendum being decided by the sort of narrow majority recorded in the Ashcroft poll, she replied: “That’s why we’re saying let’s have this in five years, let’s plan, let’s map it out, let’s demonstrate to people what this new Ireland would look like.”

A previous Lord Ashcroft poll showed that six out of 10 Brexit voters would rather see Northern Ireland leave the union than Brexit not to take place.

Ms Anderson said: “It’s really not surprising that people in Britain would think the Irish people should follow them over a cliff and into that disaster zone.

“We have a history of colonisation and imperialism and the whole country being under Britain’s control and the last thing we need is to be following Britain’s pathway.

“It’s not going to work in the favour of the people of Britain.”

She added: “But people of Britain should sort out their own problems and they should leave us with the situation we are in and allow us to plan and prepare for a better Ireland.

“We don’t want to interfere in their problems and we wish they would stop interfering in ours and allow us to just go forward in that reasonable sensible way to reunite our country.”

Ms Anderson has been a vocal critic of Brexit in the European Parliament, famously once telling former prime minister Theresa May to “stick your border where the sun don’t shine” during a fiery debate contribution.

She declined to comment on her plans for the future, but said: “I’ve got plenty of drive and energy and enthusiasm left in me so this is not going to be the last of Martina Anderson whatever happens.

“Monday is another world.”