Nicola Sturgeon to set out ‘next steps’ towards Scottish independence 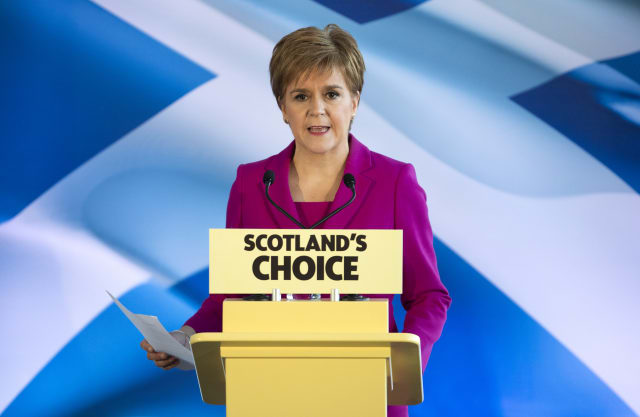 Boris Johnson’s rejection of a second Scottish independence referendum cannot continue as there is a “cast-iron democratic mandate” for another vote, Nicola Sturgeon is to insist.

The Scottish First Minister has chosen Brexit day to set out the “next steps” for Scotland’s future, and she will accuse the PM of being “terrified of the Scottish people having their say”.

Her speech also comes the day after a YouGov poll put support among Scots for leaving the UK at 51%.

Ms Sturgeon will say: “We have a cast-iron democratic mandate for an independence referendum – and the latest polling shows a majority back Yes.

“Boris Johnson is terrified of the Scottish people having their say but his bid to stand in the way of democracy will not succeed.”

Pressure on the union has been mounting since Scots voted to stay in the European Union in 2016.

Last month’s general election saw the SNP, whose campaign focused on halting Brexit and giving Scots a choice on their future, increase their seats at Westminster.

The Scottish Parliament this week voted in favour of a second independence referendum, and Ms Sturgeon will insist on Friday that Scotland can have a “brighter, better future as an equal, independent European nation”.

Speaking in Edinburgh, she will say: “Tonight Scotland will be taken out of the European Union against the wishes of the overwhelming majority of people in Scotland.

“Nothing could more starkly demonstrate how our nation’s needs are no longer served by a broken, discredited Westminster union.

“But there is the prospect of a brighter, better future as an equal, independent European nation.

“And today I will lay out the next steps on Scotland’s journey to independence.”