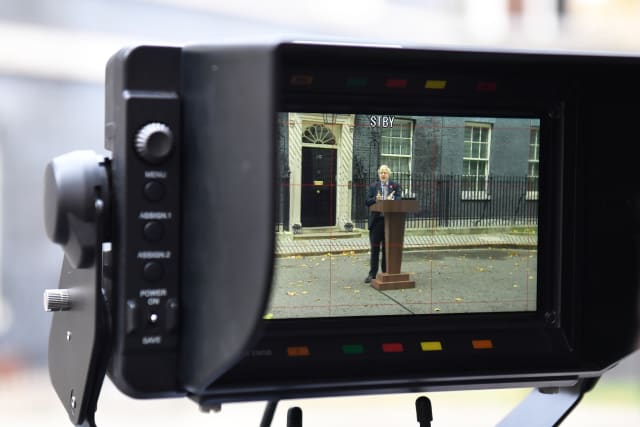 Downing Street has refused to back down over a decision to freeze out the BBC and other national broadcasters from recording Boris Johnson’s Brexit day message.

Mr Johnson will issue an “address to the nation” on Friday January 31, to mark Britain’s exit from the European Union at 11pm that evening.

But, in a move critics said had “worrying overtones”, Downing Street is due to film the Prime Minister’s message internally rather than honouring a “long-established” arrangement of having momentous speeches covered by a national broadcaster.

Traditionally, speeches by the PM at major intervals in Britain’s history have been recorded by a single broadcaster and then shared with other television networks, in what is known as a “pool” system.

Number 10 has decided to forgo the usual arrangements by using an in-house digital team for the Brexit address, who will then distribute the recording to news outlets and publish the Conservative Party leader’s message on social media.

The PM’s official spokesman, when asked about the stand-off with broadcasters, said: “My understanding is the address to the nation will be available to all including all TV broadcasters, for those who want to watch it on the news, as well as being streamed on social media, and that will allow everyone to hear directly from the PM at this historic moment.”

The BBC said it could not guarantee it would use Downing Street’s footage, while the Society of Editors encouraged No 10 to “engage with the media rather than attempt to bypass it”.

The Brexit day message move follows a boycott by the Government of BBC Radio 4’s Today programme and ITV’s Good Morning Britain, with no minister appearing on either since the election.

Ian Murray, executive director of the Society of Editors, said: “While it is not unacceptable that the Prime Minister creates his own video releases to be aired, if wished by broadcasters, this latest development does have worrying overtones of an administration possibly seeking to bypass the mainstream media to achieve an easier ride.

“In a free and liberal democracy, it is always best that the Government engages with the media rather than attempt to bypass it.

“In the end, only the public is the loser when open access to those in power is closed off or restricted.”

The BBC said it would make its own judgment on the “news value” of the address before deciding whether to air Mr Johnson’s words.

“There’s a long-established process for recording statements by the Prime Minister at significant times where one broadcaster records it and shares the footage,” said a spokeswoman for the publicly-funded broadcaster.

“The BBC and the other broadcasters are well used to following this usual process, which respects our independence as broadcasters.

“If Number 10 wants to supply its own footage we will judge it on its news value when deciding whether to broadcast it, as we would with any footage supplied to us by third parties.”

It is understood ITN, provider of daily news programmes for ITV, echoes the BBC’s sentiments on the matter.

Sky News, also part of the No 10 pool system, has been approached for comment.

The development comes at a time of tension between Westminster journalists and the Downing Street administration following a decision, taken without consultation last month, to move daily briefings with the Prime Minister’s official spokesman from Parliament to Downing Street.

Journalists have to pass through security to access the briefings at 9 Downing Street, a change that sparked fears Mr Johnson’s officials could start to vet who attends the meetings.