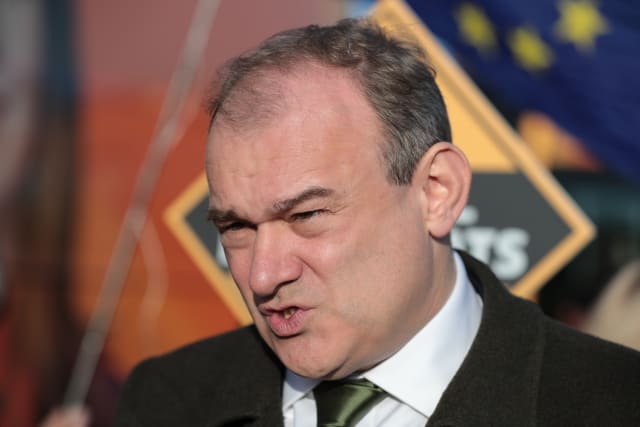 The Liberal Democrats are committed to working with “progressive” parties to push for a soft Brexit during the upcoming trade talks.

Acting Leader Sir Ed Davey used a speech in Manchester to concede that the campaign to stop Brexit was over, with the UK due to leave the European Union on Friday.

But he told supporters he wanted opportunities for British citizens to study and receive free healthcare in Europe to continue after the transition period ends in 2021.

Making his pitch for Boris Johnson to sign up to a soft Brexit during the trade talks with Brussels, due to start in March, Sir Ed said the Lib Dems wanted to see the continuation of the European Arrest Warrant, the Erasmus university study programme and British access to European Health Insurance Cards after the UK’s departure.

“Liberal Democrats will be on a damage limitation exercise to stop a hard Brexit hurting British people,” he said in his speech at the Science and Industry Museum.

In an open invitation to other parties, the former energy secretary said the 11 Lib Dem MPs would be prepared to “work with anyone” in the UK to “reunite our country”.

Any bid to put to pressure on the Prime Minister to accede to soft Brexit demands would require a heavy rebellion from the ruling Conservative benches to overturn the Government’s 80-seat majority.

“To defend these values – and to start winning again – we must regroup.”

Britain will cease to be a member of the EU at 11pm on January 31, with Brexiteers planning a celebratory rally in Parliament Square to mark the moment.

And while Sir Ed said Friday would be a “heart-breaking” day for pro-Brussels campaigners, he called for the divisions of the referendum to be put to bed, adding: “We must no longer be a country that is divided by Leave and Remain.”

The 54-year-old continued: “As I accept that tomorrow at 11pm our campaign to stop Brexit is over, I do so standing shoulder to shoulder with the millions of pro-Europeans I have campaigned with over the past four years.

“Tomorrow will be a celebration for some, but for us it will be a heart-breaking day.

“Whilst some may relish this Tory Brexit experiment, many will be anxious and upset, worried about what the future holds for them, their families, communities and businesses.”

Sir Ed is standing in as co-leader of the party, along with Baroness Brinton, after Jo Swinson lost her East Dunbartonshire seat at the election to the SNP – forcing her to step down from the role.

The party is not due to elect her successor, who will come from its pool of 11 MPs, until July 15.