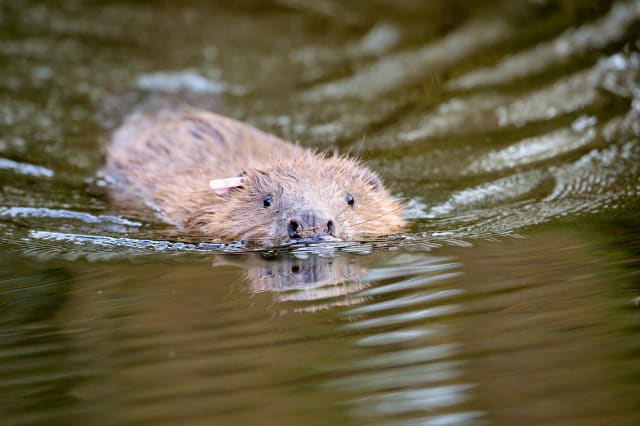 An adult pair of Eurasian beavers have been released on a National Trust estate on Exmoor.

The male and female were released on the Holnicote Estate in Somerset on Thursday morning to help with flood management and improve biodiversity.

Beavers became extinct on mainland Britain in the 16th century due to hunting and are now present in a handful of sites across the country.

The beavers released in Somerset have been relocated from wild populations on the River Tay catchment in Scotland, under licence from Scottish Natural Heritage.

At just after 11.30am, the female beaver made her way out of her crate and began swimming in a pond in the unmanaged woodland area.

She was followed at 12.15pm by her male counterpart, who was released in a different part of the 2.7 hectare site.

The release, into an enclosure surrounded by sturdy fencing, is the first by the National Trust.

Ben Eardley, project manager for the National Trust at Holnicote, described the arrival of the beavers as “super exciting” for the conservation charity.

“The male was quite feisty and the female much more placid but all went well,” Mr Eardley said.

“We are releasing them into this enclosure to create change, to bring the light and the water back into the site.

“That will create opportunities for other wildlife.”

Mr Eardley said bringing the beavers to Exmoor was “a long process but worthwhile”.

The pair were trapped under licence from Scottish Natural Heritage by consultant ecologist Dr Roisin Campbell-Palmer and were health-screened and quarantined by Five Sisters Zoo in West Lothian.

They have been examined by wildlife vets and specialists and met all screening requirements, according to Defra standards and Natural England licence conditions.

The only way of legally releasing beavers in England is into an enclosure licensed by Natural England.

“Currently it is also pretty dark in there during the summer, with the same vegetation.

“What the beavers are going to to do is open that up, bring that light in, bring the water in and create more of a mosaic of different types of wildlife.”

A recent poll by YouGov found 76% of Britons support beavers being reintroduced to the UK.

Once settled in the estate, the beavers will build a lodge or burrow and begin to modify the enclosure to suit their needs.

It is hoped that they will start a family there, with beavers typically producing around three kits per year.

The National Trust said the releases will be carefully monitored by staff and volunteers, with help from Exeter University and others to document changes to the habitat.

Mark Harold, director of land and nature at the charity, said: “We need to work with natural processes in the right places.

“This is a different way of managing sites for wildlife – a new approach, using a native animal as a tool.

“The development of a more natural river system; the slowing, filtering and storing of water, can develop a complex mosaic of habitats which are not only good for nature, but for people too.”