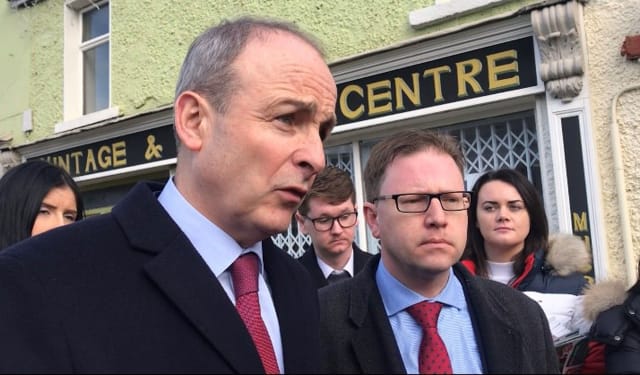 The leader of Fianna Fail has accused Fine Gael of politicising Brexit – and urged the EU commissioner Phil Hogan to stay out of domestic politics.

Speaking at the European Institute in Dublin on Thursday, Micheal Martin used his speech to attack Taoiseach Leo Varadkar and the wider Fine Gael party on how they have used Brexit during the election campaign.

On Friday, Fine Gael ministers will stage a photocall at 5am at Dublin port ahead of Britain leaving the EU at 11pm GMT.

Mr Martin said: “They are politicising Brexit and it is desperate stuff. Getting up at five in the morning to go to a port. Fine Gael are all about spin, substance and photocalls.

“Here now we see the last great photo op where they are getting up at five in the morning to be photographed, and that is pathetic stuff.”

Mr Martin criticised EU chief trade negotiator Phil Hogan, a former Fine Gael MEP, over an interview with Irish broadcaster RTE on Wednesday, in which he warned a “crash-out Brexit” is still possible at the end of December.

In an interview with RTE, Mr Hogan warned against complacency and said Irish people need to “come out of their slumber” and wake up to that reality.

He said: “I’m very concerned at what I see in Ireland the moment. There’s a lot of complacency in the system. Commentators and the media and the public generally don’t seem to realise we’re starting the most difficult part of the negotiations.

“If we avoid a no-deal Brexit, there will still be implications and the take-up and participation in some of the schemes for business to get ready for Brexit was not very high and needs to be renewed.”

Mr Martin said Mr Hogan should “stay out” of domestic politics while the general election campaign is ongoing.

He said: “I think Phil Hogan should stay out of domestic politics now for the next week. To me that was a political party intervention.

“Before Christmas, Fine Gael were saying this was a great deal, and now Phil Hogan is saying there is a freight train coming down the track and Big Phil is saying Irish people are in a slumber.

“There is a new story and narrative that is being created that things are terrible altogether, but people are going to see through that as an election creation to try and frighten people to go in certain directions and I don’t think it will work.

“I think that this is necessary to say because there have been unfortunate attempts in recent weeks to politicise Brexit – to say that Ireland can’t have a new government because only current office-holders have the skills and knowledge to handle Brexit.”

“What is particularly disappointing about this is that it is dismissive of the fact that Ireland should be proud of how political unity has reinforced our national strength at a time of real risk. Indeed it, ignores the reality that we had a functioning government and parliament during the threat of a crash-out Brexit solely because Fianna Fail acted.

“Against this background by us of positive engagement and leadership on the threat of Brexit during the past seven years, the idea that Ireland cannot change its government because of Brexit is cynical and desperate in equal measure.”

Fine Gael has sought to place its role in the Brexit negotiations as a key part of their re-election strategy, with Mr Varadkar insisting the same team of Fine Gael ministers should be re-elected to deal with the next round of negotiations.

Meanwhile, Mr Martin distanced himself from a Fianna Fail MEP who criticised an RTE journalist Tony Connelly and RTE for its coverage of the European Parliament, and called for a cut in the TV licence fee.

Mr Kelleher said he was not criticising Mr Connelly, but rather RTE’s coverage of EU issues.

Mr Martin said: “Tony Connelly in particular has earned the appreciation of he Irish people for his consistent and very hard work. RTE deserves credit for the comprehensive nature of its work.”