Coronavirus: Government hopes to bring British nationals back to UK on Friday 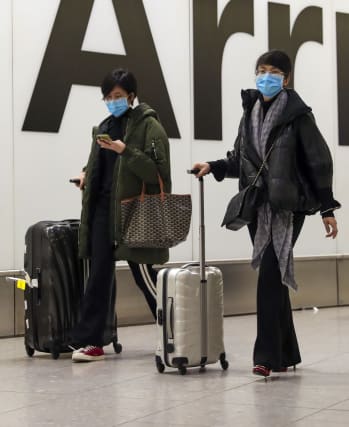 The Government is hoping to bring back Britons from coronavirus-hit Wuhan in China on Friday and will fly them into a military base, the PA news agency understands.

The flight, which has not yet been given permission to leave by Chinese authorities, could land at RAF Brize Norton in Oxfordshire.

It comes as the World Health Organisation (WHO) emergency committee is expected to declare an international public health emergency during its meeting on Thursday.

The Government has been negotiating with Chinese authorities over permission for a flight to leave Wuhan, after one planned for Thursday was stopped.

Downing Street said the UK was working “urgently” with Chinese authorities to ensure citizens in Wuhan can return on a flight “as soon as possible”.

The Prime Minister’s official spokesman said: “We are doing everything we can to get British people in Wuhan safely back to the UK.

“A number of countries’ flights have been unable to take off as planned including the British repatriation from Wuhan.

“We are working urgently with the Chinese authorities to ensure that the flight can take off as soon as possible.”

But the plane has been prevented from leaving China because “we haven’t got the necessary clearances and we are working with the Chinese authorities on securing those”, the spokesman said.

The Government anticipates flying out around 200 UK citizens who have been in Wuhan and the surrounding Hubei province.

It comes as a hotel in Yorkshire was put on lockdown after a man, believed to be a Chinese national, was taken to hospital after falling ill.

The man, who was a guest at the Staycity Hotel in the centre of York, was taken to hospital by medics on Wednesday night.

Paramedics wearing special protective clothing entered the hotel, near the city’s Barbican theatre, after reports that a guest had fallen ill at around 7.50pm.

A spokeswoman for the hotel group said: “Staycity Group have confirmed that a man, believed to be a Chinese national, staying at the group’s property in York was taken ill yesterday and is understood to be undergoing tests at a local hospital.

“Paramedics accompanied the man, along with his two travelling companions, out of the property at around 7.50pm last night.

“Until more is known the apartment containing the group’s belongings will be cordoned off, along with surrounding rooms, after which the area will undergo a thorough environmental clean and disinfection, as is company policy.”

Earlier, Nick Gibb, the School Standards Minister, told Sky News there were “some difficult issues that are being negotiated at very senior levels between the British Government and the Chinese Government” over getting a plane carrying British nationals out of Wuhan.

Kharn Lambert, whose grandmother Veronica Theobald, 81, from Lancaster, is hoping to leave Wuhan, told the PA news agency the current situation was that a flight may leave on Friday.

“We are more positive that the Government are actually doing something now and they are communicating with us better than before,” he said.

“The situation is basically we won’t go to the airport until we receive the confirmation email.

“Nobody has actually received an official email to say whether we are on the flight or not and what time it will be leaving, so will be still in their apartments waiting for that email.

“They said that it’s probably more likely going to be tomorrow morning now, but again you know that could change.

“The information is changing hour by hour so we will just have to see.”

Jeff Siddle, from Northumberland, told the BBC his family faced a “terrible dilemma” after he and his nine-year-old daughter were told they could fly back – but not his Chinese wife, who has a permanent residency visa for the UK.

He said the flight had been put back to “provisionally” Friday but he had not been given an exact time.

Passengers say they have been told only to take hand luggage on the flight.

The WHO meeting is taking place on Thursday afternoon, with a decision on a declaration expected this evening.

The WHO has said the “whole world needs to be on alert” over the new coronavirus outbreak.

Dr Michael Ryan, executive director at the WHO Health Emergencies Programme, said on Wednesday that the decision to reconvene was due to the increasing number of cases and evidence of person-to-person transmission of the virus.

The number of cases has jumped to 7,711, surpassing the 5,327 people diagnosed with severe acute respiratory syndrome (Sars) during the 2002-03 outbreak.

The death toll, which has risen to 170, is currently lower than the 348 people who died in China from Sars.

India confirmed its first case on Thursday, as did the Philippines.

A professor with the Chinese Centre for Disease Control and Prevention said in a new study that the data they had so far was consistent with coronavirus being initially hosted by bats.

The WHO has said around one in five cases of coronavirus are leading to severe disease.

Meanwhile, British Airways has extended its suspension of all flights to and from mainland China until Monday.

The airline said it will “continually review our schedule according to advice from the authorities”.

Virgin Atlantic flights between Heathrow and Shanghai are continuing to operate as scheduled.