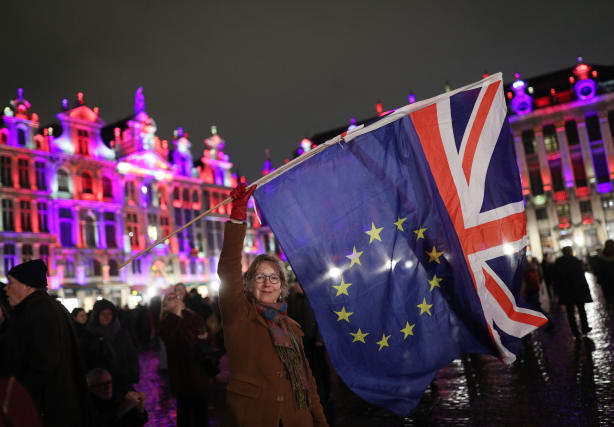 The UK’s penultimate night in the EU has been marked by music and celebrations across Brussels, hosted by Remain-supporting MEPs.

The Mayor of Brussels arranged for the city’s Grand-Place to be lit up in the Union Flag’s red, white and blue – while a band played English rock and folk songs in the square.

Philippe Close set up the event to promote the ongoing ties between Brussels and the UK, and attendees had the chance to get their picture taken with a red phone box while Molly Malone blared in the background.

A band of bagpipers also marched through the square sporting kilts and flying the flag of St Andrew.

The party featured a performance by “Magic Magid and the F*** Brexit Orchestra”, a wedding arch to stage fake weddings for “Brexit victims” complete with a veil and a ring.

In the centre of the square, the statues had been gagged to represent the silencing of Britain’s voice in Europe.

Three yellow Minis branded with the slogan “The Brexit Job: The Self Devastation Society” we’re parked nearby.

Those who did not fancy a night in the cold had the option of heading to a ceilidh at La Maison des Ailes close the the European Commission.

Despite the show of good cheer, many Green MEPs could not hide their anger at being shut out of their main sphere of influence.

“Here in the European Parliament, it’s proportional and you get a different type of politics – you’re looking for common ground and engaging in proper dialogue rather than a dialogue of the deaf we have in Westminster.”

Ms Chown vowed to return to the UK with “a real determination” to champion political reform, adding that she could see the energy around the unsuccessful campaign for a second referendum bringing new momentum to the same cause.

Catherine Rowett, who represents the Greens in the East of England, thought the UK would be back in the EU within a generation.

“Obviously it will happen,” she told the PA news agency.

“People are aware of what they are losing, as long as the right wing forces don’t manage to raise a generation who are afraid of foreigners.

“I think when the current generation of 16 to 30-year-olds are in the leadership positions, then they will take us back in.”

London MEP Scott Ainslie could not hide his anger at the Brexit Party: “I feel part of my identity has been ripped out of me by a malignant force. It’s been a complete con.”

On Friday morning, the Brexit Party is due to make a final march led by Anne Widdecombe from the EU Parliament towards the Eurostar – so its MEPs can join in the planned celebrations in Parliament Square in London.