Brexit day expected to be see protests and celebrations in Ireland 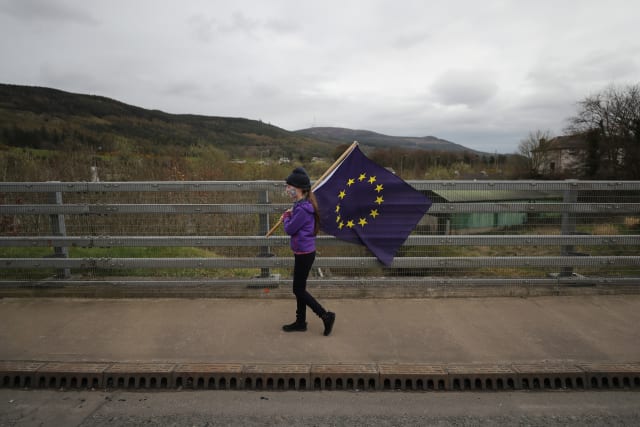 Brexit day is expected to be greeted with both protests and celebrations in Ireland.

In the final hours before the UK officially leaves the EU, a series of protests have been planned along the Irish border.

Anti-Brexit campaigners will also hold a demonstration at Stormont on Friday afternoon, before Brexit backers later hold a celebration party at the gates of the seat of Northern Ireland’s devolved government from 10.30pm for a count down to 11pm.

It came after warnings about challenges the PSNI may face following Brexit, including an uplift in dissident republican violence and potential public order situations.

Assistant Chief Constable George Clarke then described it as a “sensible operational contingency”, adding it will be kept under review.

In the Irish Republic, the UK’s departure from the EU has become a key issue in the ongoing general election campaign.

Fine Gael ministers are hosting a 5am tour of Dublin Port as the first ships of Brexit day dock and unload.

A few hours later Ireland’s premier (Taoiseach) Leo Varadkar will give an address on Brexit in Dublin.

The Irish border, which will become the only land frontier between the UK and the EU after Brexit, dominated negotiations over three years for a withdrawal agreement, proving a sticking point amid opposition to a reinforced boundary.

Unionists have also opposed checks on the Irish Sea amid claims and counter claims over what the reality will be for goods crossing the channel after Friday.

As 11pm draws closer, there will be protests at six points along the Irish border by the organisation Border Communities Against Brexit, from Carrickarnon just south of Newry to Aughnacloy in Co Tyrone, Aghalane and Blacklion in Co Fermanagh, the Strabane/Lifford border and Bridgend in Co Londonderry.

The hour of the UK’s departure will be marked with a celebration event at Stormont at which union flags are expected to be waved and toasts made.