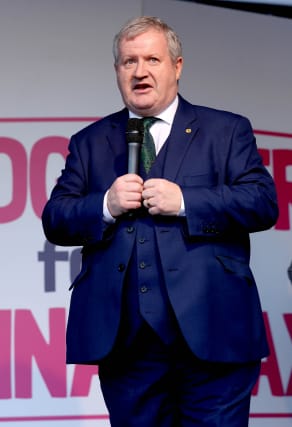 Westminster is “going to have to give way” over a second Scottish independence referendum, the SNP’s Ian Blackford has warned, as he branded Boris Johnson’s position “anti-democratic”.

Mr Blackford played down reports of differences of opinion within the party over how to deal with the referendum issue, insisting: “I’d say the party’s actually pretty united.”

The SNP’s Westminster leader told the PA news agency: “This is an argument that we are winning and we have to make sure that we stay on the course and that Boris Johnson has got to accept that he cannot stand in the face of democracy.”

SNP MP Mhairi Black has claimed “there could be mileage” in a consultative referendum on independence if Mr Johnson does not grant an official one, in comments to The Sunday Times.

Mr Blackford said: “I understand the frustrations of people saying, well what are we to do if Westminster says no.

“We are absolutely determined in all circumstances to make sure that we do this by what’s often referred to as the gold standard of the Edinburgh agreement in 2014 and that position is not going to change. We will win this argument.”

His comments came as First Minister Nicola Sturgeon said Scotland had “the right to choose its own future” as MSPs in Holyrood backed her motion for a second independence referendum to be held this year.

Mr Blackford said: “I don’t think that Boris Johnson has a position which is defendable.

“I’ve accused him of being a democracy denier and that’s what he is. It’s almost like someone with their hand over a Bunsen burner and you keep turning the heat up and he keeps saying it doesn’t hurt.

“Well there comes a point where, that I’m afraid isn’t going to work and the harsh reality is that if you believe in democracy, you cannot continue to say to the electorate in Scotland, we’re going to ignore you.”

Mr Blackford predicted a fresh poll would happen with pressure mounting from his party.

On the SNP’s 2020 timeframe, he said: “It is realistic, we’ve passed the legislation which is required for this in the Scottish Parliament with the Referendum Bill. I absolutely accept that there is a window of opportunity and if we’re not able to get Boris Johnson to see sense then that opportunity will close.

“I’ll simply say that if that is the case, that it means that we run into the Scottish elections next year and that will be about that defiance from Westminster, that refusal to accept the sovereignty of the Scottish people.”

SNP leaders have been pushing for another vote since the general election in December, which saw the party win 47 seats north of the border.

After laying out the “democratic case” for another referendum, the First Minister sent an official request for a Section 30 order to Westminster – which was rejected by the Prime Minister this month.