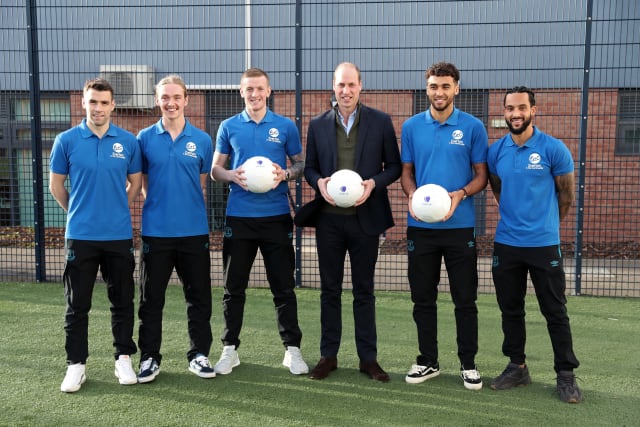 The Duke of Cambridge has spoken to Everton footballers about the pressures on their mental health.

William met footballers Theo Walcott, Jordan Pickford, Dominic Calvert-Lewin, Seamus Coleman and Tom Davies as he visited the club’s charity Everton In The Community as part of the Heads Up campaign on Thursday.

Speaking to the players as members of Everton Veterans Hub played five-a-side football nearby, the group discussed how they coped with pressures.

Calvert-Lewin told the duke: “We have had some tough times over the past two or three seasons and we have helped each other.

“One thing that nothing can prepare you for is the opinions of thousands and thousands of people.”

Goalkeeper Pickford said: “This was the first club away from home for me.

“I went and spoke to Seamus and the more experienced lads just to get the vibe of the club and how the club works, that made me settle in a lot easier.”

William asked the players whether they felt able to speak about any issues and said he hoped the campaign would encourage clubs to create a “holistic approach”.

He asked if they had come across other players with mental health problems.

Coleman said: “I’ve spoken to a couple of lads in Ireland and it’s not until they have finished playing they have started speaking about it.”

William said: “They shouldn’t be embarrassed.”

He told the players: “I really appreciate what you guys are doing, it’s fantastic.”

Speaking after meeting the duke, Davies told the PA news agency: “He’s brilliant. I didn’t really know what to expect when meeting him but he was great.

“He was so easy to speak to and passionate about what he is doing with Heads Up.”

The duke spoke to members of the Everton Veterans Hub, which uses sport to engage ex-service personnel, about the problems they had since leaving the forces and the support they had from the charity.

He asked: “Do you think the military does enough to prepare you for civvy life?”

When they answered no, he said: “I do agree with you.

“The bit I’ve always found difficult is the skills you learn in the forces don’t translate easily on a CV.”

William was shown an old football rattle in Villa colours when he joined a session of the Stand Together project, which tackles social isolation among people aged 70 and over in Merseyside, along with former Everton player Graeme Sharp.

The duke demonstrated how to use it and, in a reference to Villa’s upcoming appearance in the Carabou Cup final, said: “Can I take it to Wembley? We’re going to need a lot of these!”

Kenny Davis, 82, told the duke he had served in the Coldstream Guards at Buckingham Palace and said: “It’s worth going.”

The duke also joined in with a game of emoji bingo with children, aged eight and nine, from Springwell Park Primary School in Bootle.

The children were playing the game as part of Tackling The Blues, a sport and education-based programme for children and young people with mental health challenges.

William spent two hours at the charity’s base, near the team’s Goodison Park stadium in Liverpool, and was presented with an Everton shirt and a commemorative programme from an Everton and Aston Villa match before leaving.