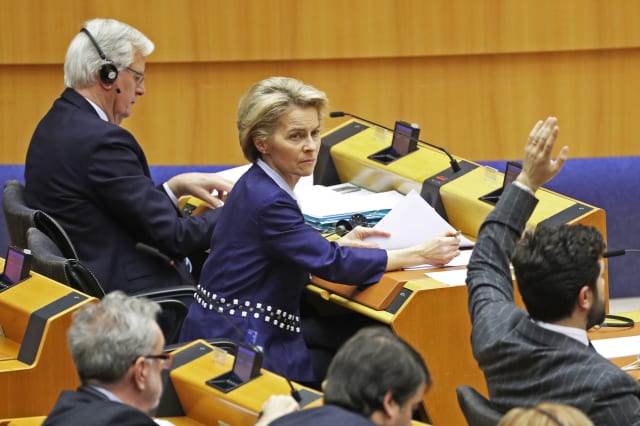 The president of the European Commission has said the EU remains determined to forge a “close partnership” with Britain after Brexit.

As the European Parliament prepared to vote on Boris Johnson’s Withdrawal Agreement, Ursula von der Leyen said in an emotional message to the UK: “We will always love you.”

MEPs meeting in Brussels were expected overwhelmingly to back ratification of the agreement, paving the way for Britain to leave with a deal in place on Friday.

Addressing the parliament, Mrs von der Leyen said it would only be a “first step”, with negotiations set to start on a trade agreement once Britain is formally out.

“From now on, it’s about our new partnership with the United Kingdom. The negotiations are about to start,” she told MEPs.

“And just to be very clear, I want the European Union and the United Kingdom to stay good friends and good partners.”

She quoted the poet George Eliot, saying: “Only in the agony of parting do we look into the depth of love.”

She added: “We will always love you and we will never be far, long live Europe.”

“It is sad to see a country leaving that twice liberated us, has twice given its blood to liberate Europe,” he said.

He predicted, however, that the UK would eventually rejoin, with many British people deeply unhappy at the prospect of leaving.

“In the last couple of days, I have received hundreds of mails from British citizens saying they desperately want to stay or return,” he said.

“So this vote is not an adieu, this vote, in my opinion, is only an au revoir.”

He poured scorn on claims by supporters of Brexit that it would mean Britain recovering its sovereignty.

“What is in fact threatening Britain’s sovereignty most – the rules of our single market or the fact that tomorrow they may be planting Chinese 5G masts in the British islands?”

However, Brexit Party leader Nigel Farage said the UK was “never coming back” as he gave his final speech in the parliament.

“This is it, the final chapter, the end of the road, a 47-year political experiment that the British frankly have never been very happy with,” he said.

Mr Farage said that he hoped Britain’s departure would start a debate across the rest of Europe about the EU’s future.

“I’m hoping this begins the end of this project. It’s a bad project, it isn’t just undemocratic, it’s anti-democratic.”

As he finished, he and the other Brexit Party MEPs waved Union Flags, drawing a rebuke from the chair for their display.

The debate in Brussels follows the completion last week of the passage of the Withdrawal Agreement Bill through the British Parliament at Westminster.