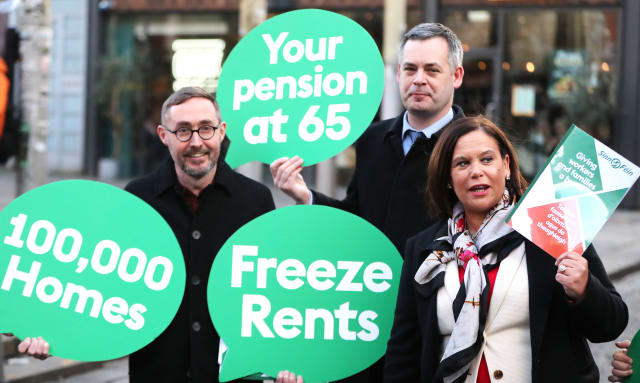 Fianna Fail leader Micheal Martin has said Sinn Fein’s 22 billion euro spending plan would “destroy jobs” and again ruled out going into coalition with them in the next government.

Sinn Fein proposes that, if elected, it would increase public spending to spend an additional 22 billion euro by 2025.

Micheal Martin criticised the spending plan and said, if implemented, it would threaten the Irish economy.

“Have you seen their General Election manifesto? They would destroy jobs in this country,” he told RTE radio on Wednesday.

“Now we have to do it again, in terms of small to medium-sized enterprises, the bread and butter of this economy.

“People who set up companies who employ 15 people, 20 people, 50 people. That’s who I want to represent.”

“Just look at the Sinn Fein manifesto, it will destroy jobs in this country with that manifesto.

“You can not raise taxes by four billion euro without it having an impact on ordinary people.”

Mr Martin added the economy can not afford to narrow the tax base any further as it needs to guard against potential shocks such as Brexit.

He again ruled out going into Government with Sinn Fein and said he “would stick to his word” on the issue.

“What you underestimate is the depth and the strength of opposition to Sinn Fein within the Fianna Fail party and among the grassroots and among people who still remember what happened.

“People within Fianna Fail resent the legacy of Sinn Fein in terms of the gardai (Irish police) that were attacked and killed and the army.

“People come up to me and they say that,” he said.

“What’s worse is Sinn Fein has never fully apologised for that.

“There are people in my party that tell me unequivocally they would never accept going into government with them and then you add to their record in Northern Ireland where they collapsed the institution for three years.”

Mr Martin said Fianna Fail would “do business” with other centrist parties such as Labour and the Green Party.

Asked if he was ruling out another confidence and supply deal with Fine Gael he said “we should respect the electorate” and wait for the outcome of the election.