Rebecca Long-Bailey progresses to final round of Labour leadership contest 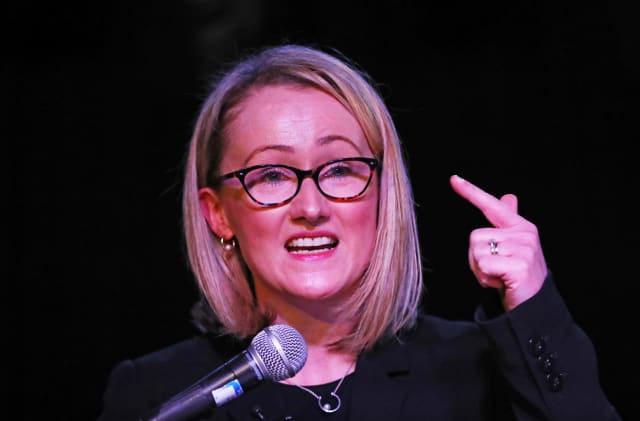 Rebecca Long-Bailey has become the third contender to make it through to the final stage of the Labour leadership contest after being nominated by the Fire Brigades Union (FBU).

The shadow business secretary’s name will appear on the ballot paper after securing the backing from a third trade union, joining Sir Keir Starmer and Lisa Nandy in making it to the last round.

The FBU’s nomination means the left-wing candidate has the support of three Labour affiliates, including at least two unions, which amounts to at least 5% of affiliate members.

She had previously received nominations from Unite and the Bakers, Food and Allied Workers’ Union.

Ms Long-Bailey thanked the unions who backed her and said: “As leader, I will unleash our movement, take power back from the gentlemen’s club of Westminster and build an aspirational socialism that speaks to people’s hopes and dreams.

“The general election result was devastating, but our policies are popular and it’s clear we must not return to the politics of the past.

“Members need a leader who sticks to their principles and has the record to prove it.

“It’s time for a new generation to step up and lead our party. Together we can rebuild trust in all of Labour’s heartlands, from Blyth Valley to Brixton, and win the next election.”

The FBU said it had decided to back Ms Long-Bailey after writing to each candidate asking for their views on the fire service, the Grenfell Tower inquiry, repealing anti-trade union laws, ending the blockade of Gaza, and Labour Party democracy.

“There can be no going back to the so-called centrism of New Labour – we never again want to see our party turn its back on workers, public ownership, and its own members.

“We will be actively campaigning for Rebecca. Only she has what it takes to transform the country, win back Labour’s heartlands, and put power back in the hands of working-class people.”

Ms Long-Bailey is due to address members at a rally in Leeds on Wednesday evening, following the announcement.

Only one candidate left in the contest, shadow foreign secretary Emily Thornberry, has yet to progress to the last round.

She has until February 14 to either win the nomination of three affiliate groups that match the 5% criteria, or by securing support from 33 constituency Labour Party (CLP) branches.

The confirmation of Ms Long-Bailey’s progress – seen by critics as the continuity candidate to the current leadership – comes after an official report largely absolved leader Jeremy Corbyn of blame for the disastrous election result.

The party lost 59 seats at the election, its worst showing since 1935.

The review circulated to the party’s ruling National Executive Committee (NEC) found it would be “unrealistic” not to say its policy to hold a fresh referendum played a “decisive” role.

Radicalism was largely ruled out as being at fault in the report by election co-ordinators Andrew Gwynne and Ian Lavery, but they did blame a glut of policies for confusing the public.

While the MPs accepted there were “negative views” of the outgoing leader, there was little blame laid at any of his actions.

It was also revealed this week that Labour’s membership surged to more than 580,000 after its general election defeat.

The increase in membership, to what was described as the party’s largest number ever, was revealed at an NEC meeting on Tuesday. Last summer the membership stood at 485,000.

A senior Labour source said: “The Labour Party was already by far the biggest party in Britain. It is now even bigger – as big as it has ever been.”

The members will vote along with other supporters for Mr Corbyn’s successor.