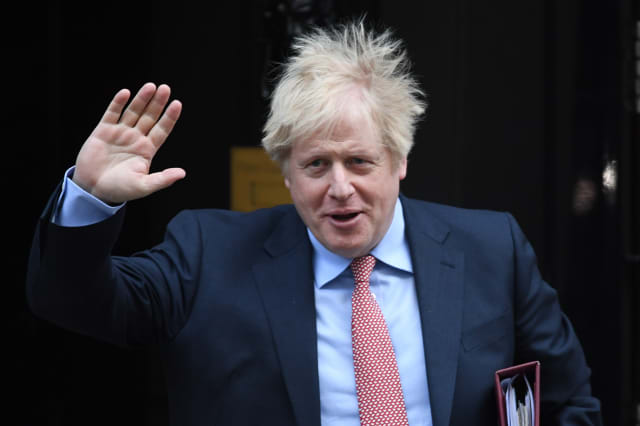 The Prime Minister provided encouragement to the proposal which would leave sizeable areas of the occupied West Bank in Israeli hands.

Labour leader Jeremy Corbyn warned it would “lock-in illegal Israeli colonisation” and deny Palestinian people their fundamental rights, adding Britain must tell the US they are “wrong” on the issue.

Palestinian president Mahmoud Abbas has dismissed Mr Trump’s plan as a “conspiracy deal”, with the Palestinians seeking all of the West Bank and east Jerusalem – areas captured by Israel in the 1967 Middle East war – and the removal of more than 700,000 Israeli settlers from these areas.

“When the Government meets with the US Secretary of State later today, will he make it clear that the British Government will stand for a genuine, internationally-backed peace plan rather than this stuff proposed by Trump yesterday?”

“I urge him (Mr Corbyn), rather than being so characteristically negative, to reach out to his friends, my friends, our friends in the Palestinian Authority, to Mahmoud Abbas, for whom I have the highest respect, and urge him for once to engage in this initiative, to get talking, rather than to leave a political vacuum.”

Mr Corbyn said he has the greatest respect for Mr Abbas and those in the Palestinian Authority, adding: “I’ve met them many times.”

He said Mr Trump’s plan “will not bring any move towards peace” and has “no support from any Palestinian anywhere in the world”, adding that Britain should be candid and tell the US it is “wrong”.

Mr Corbyn later urged Mr Johnson to ask the US to stop selling arms to Saudi Arabia while they continue the “bombardment” of Yemen, with the PM explaining the Saudi-led operation is supported by a United Nations mandate.

The Labour leader went on to criticise Saudi Arabia’s record on women’s rights, saying Mr Johnson must make clear any UK trade deal will be dependent on an “improvement in their human rights laws and human rights record, particularly in respect of women”.

Mr Johnson accused Mr Corbyn of being a “supporter and defender of the Iranian regime”, adding the UK raises human rights with Saudi Arabia.

“We will continue to do that and we will do that ever more vigorously, ever more energetically, as we pursue our policy of a global Britain doing free trade deals around the world, which will give us the leverage to make exactly these points,” Mr Johnson added.

Mr Corbyn said he condemned human rights abuses in every country, including Iran and Russia, before insisting Britain is “at a crossroads” as it leaves the EU.

He said: “The signs are this Government is prepared to sacrifice our country’s interests and values for short-term political advantage and a sell out trade deal with Donald Trump.”

Mr Johnson criticised Mr Corbyn before insisting the Government is “leading the world” in tackling abuses, sticking up for human rights and championing the climate change struggle.

The PM added: “He would isolate this country, he would deprive us of our most crucial allies, we are going to take this country forward, outwards into the world.”