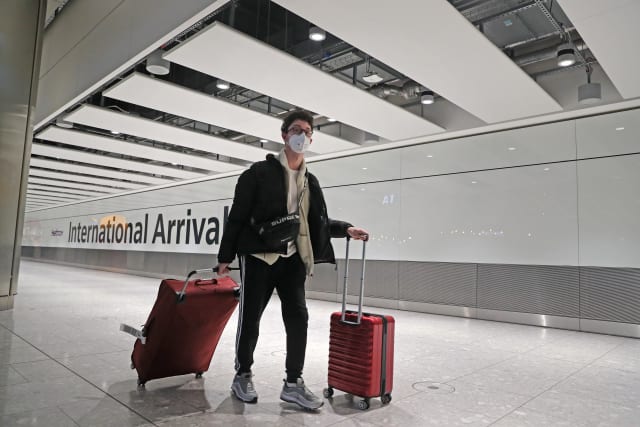 Passengers on the last British Airways flight from mainland China before a suspension gets under way have expressed their relief at returning to the UK.

On Wednesday the airline halted all flights to and from mainland China after the Foreign and Commonwealth Office (FCO) advised against all but essential travel in response to the coronavirus outbreak.

The last two BA flights from Beijing and Shanghai arrived at Heathrow’s Terminal 5 shortly before 3pm and 4pm on Wednesday.

Jeffrey Wilkinson-Lough, an engineer from Yorkshire who arrived on a flight from Shanghai, told the PA news agency: “There was a bit of a scramble to get onto flights out of Shanghai over the last couple of days.

”There was a look on relief on people’s faces when they got on this flight.”

Finn Maunder, a 23-year-old English teacher in China who also flew in from Shanghai, said: “It was all kind of a whirlwind and I decided actually it was probably a good idea to get out while I had the option but I didn’t realise that I had played it quite so close.“

Other airlines including Virgin Atlantic as well as several Chinese airlines are continuing flights.

None of the passengers who spoke to the PA news agency were aware that BA had ceased all flights.

“I didn’t know that until I landed, until I switched on my iPhone and saw the breaking news,” said Tina, a woman in her 30s who flew from Beijing.

Many of the passengers on the final two flights arrived in the terminal wearing masks.

Barrington Bryan, 81, from Bath, who flew to London from Beijing, told PA: “I’m relieved above all else, even though it’s cost me £500 to come back early.

“My worry was if I became ill I’d rather be ill in the UK than out there.”

Notices at the international arrivals gate warned passengers about the symptoms of the illness in both English and Chinese.

Passengers said their flights were checked upon landing at Heathrow, and they were also given leaflets from Public Health England detailing the symptoms of the virus.

Other passengers added the flights themselves had been checked but there were no individual temperature checks.

Many of those on the flights had been tested coming into the cities of Beijing and Shanghai.

Mr Wilkinson-Lough added: “Everything is very slowly shutting down. I noticed in Shanghai last night that restaurants are now closing, shops are closing, and people are staying at home.

”When you shut down 30 odd million people it’s a big deal.”

Some passengers said they had concerns about the information they received about the virus while in China.

Mr Maunder told PA that English language versions of the Chinese social media site WeChat were filled with misinformation about the virus.

He said: “The foreign WeChat groups are filled with rumours saying ‘oh it’s so much worse there than people are being led to believe.’

“It is quite difficult to know exactly what’s going on while you’re over there because people on social media are saying so many different things and it’s hard to know what the truth is.”

The FCO updated its advice on Tuesday and added it may become more difficult for British nationals in other provinces to leave China.