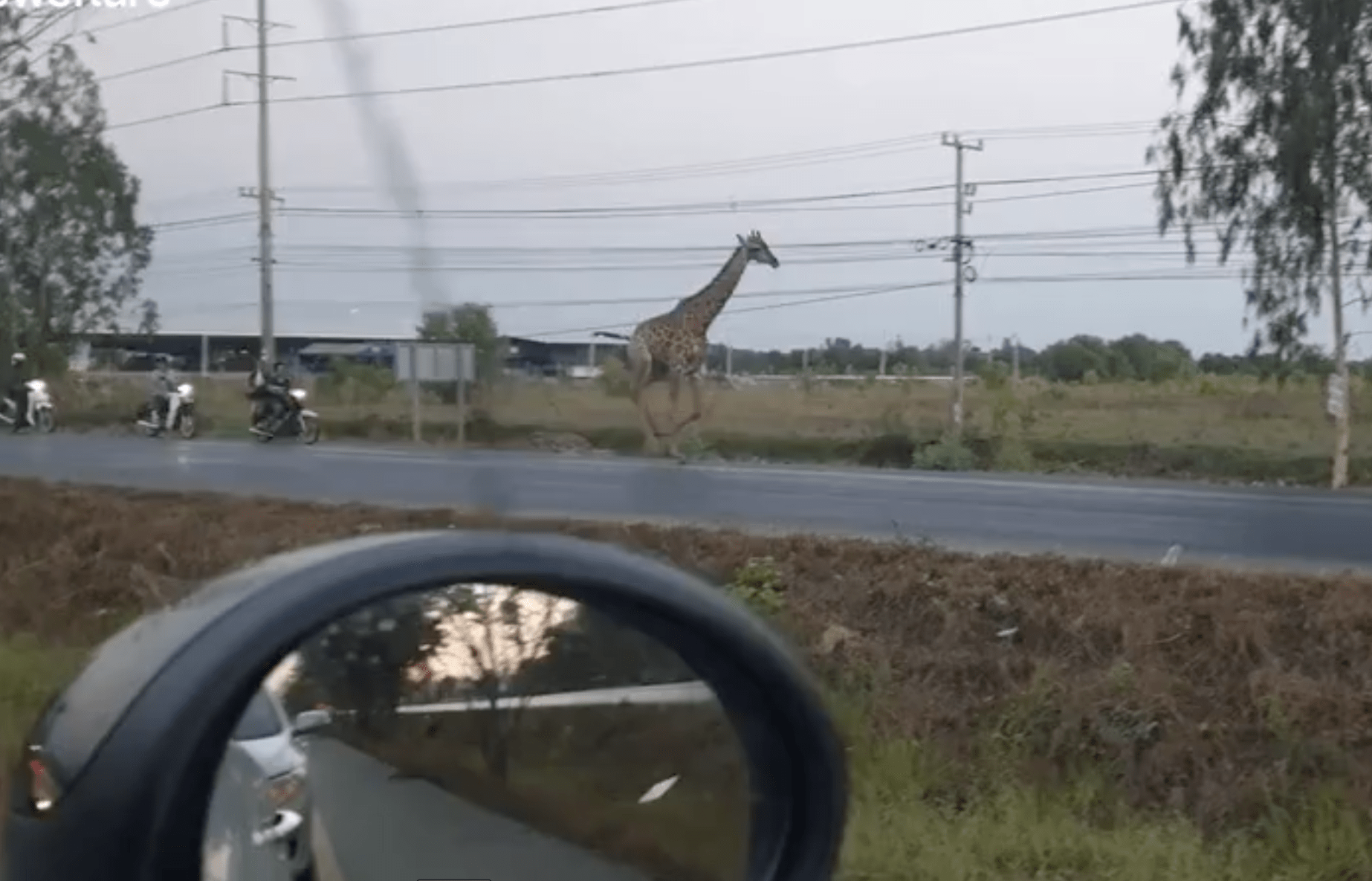 This is the astonishing moment four men on motorcycles were spotted chasing after an escaped giraffe in Thailand.

The creature sparked chaos when it broke out of a truck on the way to a zoo on Tuesday afternoon.

Footage from a car on the opposite side of the road shows the African giraffe galloping down the road as four men follow behind.

The foremost rider clips the giraffe's heels causing it to stumble, before it darts away into the dense jungle in Chachoengsao province of the country.

A second giraffe that escaped was shot with a tranquilliser and put back into the transport to be sent on its way to the zoo.

However, wildlife workers are still searching for the escapee giraffe amid fears it could disrupt the ecosystem and potentially be attacked by Asian elephants not used to seeing giraffes.

The escaped giraffe was among 66 that landed at Bangkok's Suvarnabhumi Airport, but while they were being loaded into a fleet of 24 lorries, bungling workers are believed to have accidentally unfastened a lock on one of the cages.

Police and wildlife officials descended on the area after the double escape and shot a 13ft tall giraffe with a tranquiliser.

A third, larger giraffe, that was travelling in the same truck was quickly herded back into its cage.

However, the giraffe seen in the video escaped into deep woodland.

The Chachoengsao province has vast areas of jungle that is home to hundreds of wild elephants.

Wildlife officer Phadet Laithong , from the 2nd Forest Conservation Office, said the giraffes were imported by Safari World Plc and being driven to a breeding centre in Prachinburi province.

The two recaptured giraffes have now arrived at the zoo they were destined for.

The delivery truck driver Monthon Mongphetch, 53, said he believed the mistake occurred during the loading process at the airport. He said: "We were in a convoy trucks delivering animals from the airport to the zoo but while we were stuck in the traffic, three giraffes escaped from my vehicle.

"After the giraffes jumped from the wagon and ran away I went to check the cage and found out that it had been insecurely locked from the airport."

Pin Kewkacha, executive chairman of Safari World, said it was the first time something like this had happened in the more than 30 years he had been in the business.

He suspects a bolt on the door of the cage had been accidentally unlatched while the container was being transferred to the truck.