Children injured after bus crashes into shop in Sheffield 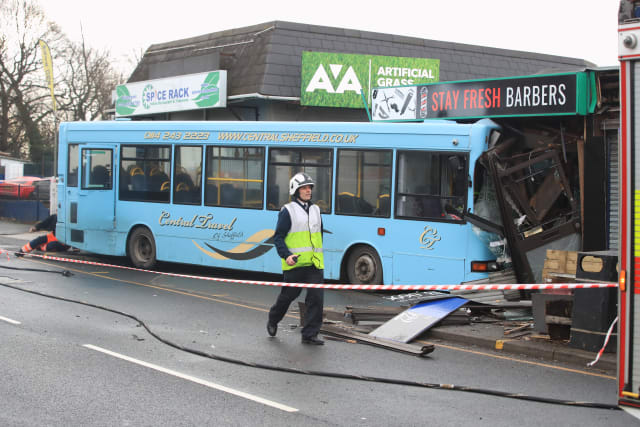 A number of children have been injured when a school bus crashed into a barber's shop in Sheffield.

About 25 children were on board the single-decker bus when the collision happened on Handsworth Road at around 7.50am on Wednesday.

Emergency services have said none of the children were seriously injured in the crash.

A South Yorkshire Fire and Rescue Service spokesman said: "Fire engines from Parkway, Central and Dearne fire stations responded to the incident at around 7.50am on Wednesday morning.

"It is thought that around 25 children were on board the bus at the time of the collision.

"A small number of children have suffered minor injuries but most are unharmed."

A South Yorkshire Police spokesman added: "Officers are currently on the scene in Handsworth Road, Sheffield, following reports that a school bus has collided with a shop,

"There are no reports of serious injuries, however emergency services will remain at the scene to secure the building."

Parents who believe their children were on board the bus have been asked to collect them, if required, from a fire service training centre on Beaver Hill Road.

Stacey Smith, 29, who owns Stay Fresh Barbers with business partner Neville Clarke, 40, said she was devastated about the bus crash.

She said: "At 10 to eight this morning, I got a phone call saying a bus has gone straight through your shop.

"Some of the kids have got a few minor injuries from the impact, nose bleeds and things like that, but there is nothing serious."

Ms Smith, who only opened the barber's in May last year, said other local businesses had offered them the use of their premises.

She said: "We used to work across the road but decided to set up ourselves. The whole of Handsworth has supported us, we were doing so well and then this happens."