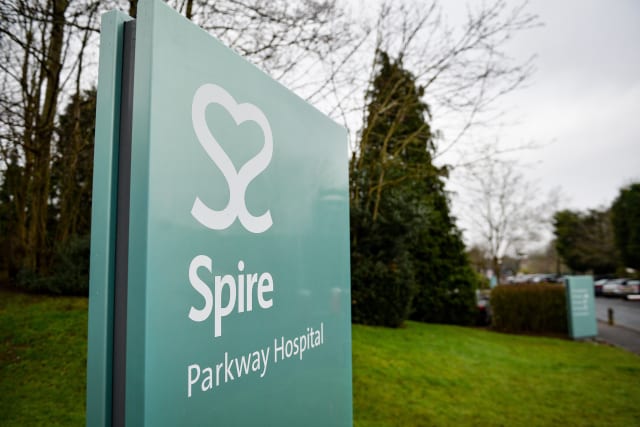 The work of a third surgeon at a hospital linked to the Ian Paterson breast surgery scandal has been subject to an internal investigation.

A shoulder procedure carried out at the private Spire Parkway Hospital by consultant orthopaedic surgeon Amir Salama was reviewed after concerns were raised about the operation, Spire Healthcare said.

A letter in July 2019 from the hospital director to patient Louis Ramone said independent specialists had found “very little clinical or radiological justification” for the operation.

Spire said it had now concluded a “thorough” internal investigation and Mr Salama is continuing to practise.

A wider review of a “sample” of Mr Salama’s patients had “not shown any patterns of incorrect or inappropriate care”, according to correspondence from Spire to Mr Ramone.

The hospital, in Solihull, West Midlands, is one of two run by the private healthcare giant where rogue breast surgeon Paterson carried out unnecessary operations.

Paterson was jailed for 20 years in 2017 for assaulting his patients, whom he left traumatised and scarred.

Last week, it was reported that 217 patients at Spire Parkway were being recalled, after concerns were raised about allegedly unnecessary or inappropriate shoulder procedures which had been performed by another orthopaedic surgeon, Habib Rahman.

Mr Ramone said he first found out concerns had been raised about the necessity of his “painful” shoulder operation when told by Mr Salama at a meeting to discuss scan results in July 2019.

The news left him “shocked”, but Mr Salama told him surgery had been the “right procedure”.

Mr Ramone claimed that at that meeting, Mr Salama also provided him with his personal phone number and email address and asked to be sent a positive reference.

He then received a letter from Spire Healthcare notifying him of its investigation.

It said: “Your care has been reviewed by independent orthopaedic specialists after our physiotherapy team raised some concerns about your care.”

It added the specialists “are agreed that there is very little clinical or radiological justification” for a procedure he underwent on September 10 2018, known as a capsular plication.

The letter, from hospital director Silvie Adams, said experts believed he “should have had a period of specialist physiotherapy” both before and after surgery.

Mr Ramone, 25, from Sheldon, Birmingham, then met with Ms Adams on August 6 last year, when he was examined by another consultant orthopaedic surgeon.

He said after questioning Mr Ramone on his symptoms, the specialist told him: “I don’t know why you’ve had the operation, if that’s the case.”

Following the August meeting, he has heard nothing further about the investigation.

A spokesman for Spire confirmed the review had now concluded, and it would be in contact with the patient.

The father of two, who works at Jaguar Land Rover, said: “I’m in the dark as to whether it was the right procedure to have or not.

“I still don’t know what is wrong with my shoulder – every day I’ve got a lot more pain.”

Mr Ramone has instructed law firm Shoosmiths, who pursued claims for those injured by Paterson since 2010.

Kashmir Uppal, medical negligence partner at the firm, said: “I am very concerned about how he has been handled.

“What measures have Spire got in place to safeguard patients.

“Because if there’s no clinical or radiological justification (for the surgery), why was that not picked up in the multi-disciplinary team (MDT) meeting?

“The purpose of an MDT meeting is to have everybody there from a radiological point of view, orthopaedic surgeons, so they can make a joint decision, based on all their expertise, of the appropriate treatment for a patient.

“I am assuming there was no MDT but if there was, why was it not picked up?”

She added: “We are not saying this case is leading to other cases, it may well be in isolation – if that is the case then I applaud Spire for identifying this.

“But it is a matter of concern because we know there’s another surgeon, Mr Rahman, also a shoulder surgeon.”

A Spire Healthcare spokesman said: “As part of our robust oversight and governance, we continuously review consultants’ practice and occasionally contact individual patients about their care if there is a concern.”

The company said that as “a responsible healthcare business”, there would “inevitably be reviews”.

“In this instance, following a complaint by one patient, we undertook a wider review of this consultant’s practice and have been in contact with one further patient to follow-up their care,” Spire said.

Meanwhile, an independent inquiry into the circumstances surrounding Paterson’s malpractice will publish its findings on February 4.