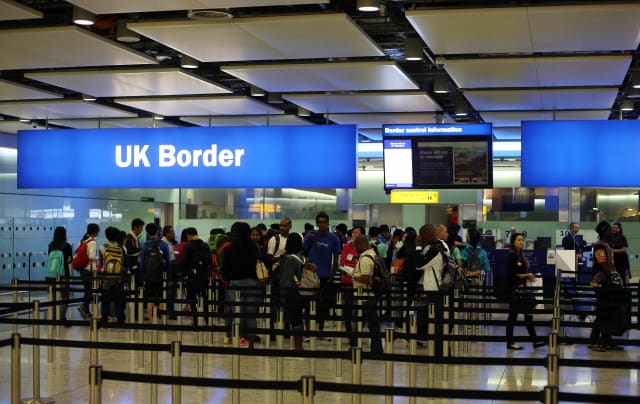 Replacing freedom of movement with a points-based immigration system after Brexit could cut economic growth and may only lead to small improvements in standards of living, experts have warned.

The Government’s proposed overhaul of migration rules could have “zero effect” on providing more British jobs for British workers, it was also suggested.

The Migration Advisory Committee (MAC) said having skill and salary thresholds for migrants compared to freedom of movement is “likely to reduce future growth of the UK economy” as well as the population.

A report advised keeping the system “simple” but said labelling it as a points-based system (PBS) would “only be cosmetic and have no purpose”.

The body – which provides independent, evidence-based advice to the Government – made a string of recommendations after reviewing plans for an Australian-style points-based immigration system set to be introduced after Brexit.

Speaking to reporters on Tuesday, committee chairman Professor Alan Manning said: “There’s an inherent unpredictability as to what will happen.”

The report estimated “very small increases in GDP per capita and productivity” and slightly improved public finances”, but Prof Manning said this would not equate to improvements in “an individual’s living standards”.

Asked if the changes could boost the availability of British jobs for British workers, he said reviews of the impact of migration on UK wages and employment opportunities found “pretty much the impact is there will be zero effect”.

He added: “Immigration hasn’t really harmed people’s employment opportunities or their wages but equally it hasn’t really benefitted them very much either.”

Ending free movement would see “slightly reduced pressures” on hospitals, schools and social housing and “slightly increased pressure” on social care, according to the findings.

Prof Manning said: “No perfect system exists and there are unavoidable, difficult trade-offs.

“The largest impacts will be in low-wage sectors and the Government needs to be clear about its plans for lower-skilled work migration.”

According to the report, no other countries use a PBS as its “only route for work migration”.

It said: “Using the broadest definition, any selective migration system can be thought of as a PBS, because it could be presented as a system with points, though we would question the value of doing so purely as a cosmetic exercise.

“We are not aware of any country that uses a PBS as its only route for work migration.

“A PBS tends to be part of a wider work migration system which may operate with, or without, requiring a job offer, or give more points if there is a job offer.

“Work migration also sits alongside routes like study, asylum and family migration; so, any PBS route only represents a share of overall immigration.

“As we recommend keeping the system relatively simple, we think that packaging in this way would only be cosmetic and have no purpose.”

Commissioned by the Home Secretary in June, the report recommends the Government should cut the salary threshold for skilled migrants from £30,000 to £25,600 for those coming to the UK with a job offer.

Teachers and skilled NHS workers “would continue to benefit from lower salary thresholds” but a higher threshold should be kept for higher paid occupations, the report also recommends.

Any PBS should also have options for skilled workers who do not have a job offer so “talented individuals” could register their interest in coming to the UK with monthly invitations to apply, according to the findings.

Prof Manning, who steps down at the end of February, said the Government needs to make decisions soon so employers have “adequate time” to prepare for changes due to come in in January 2021.

“The Government should ensure that the mistakes of previous UK points-based systems are not repeated,” the report also warned.

A Number 10 spokesman said: “The Government will introduce a firmer and fairer points-based immigration system from 2021 that welcomes talent from around the world while reducing low-skilled migrants and bringing overall numbers down.

“We will carefully consider the report before setting out further details on the new system.”