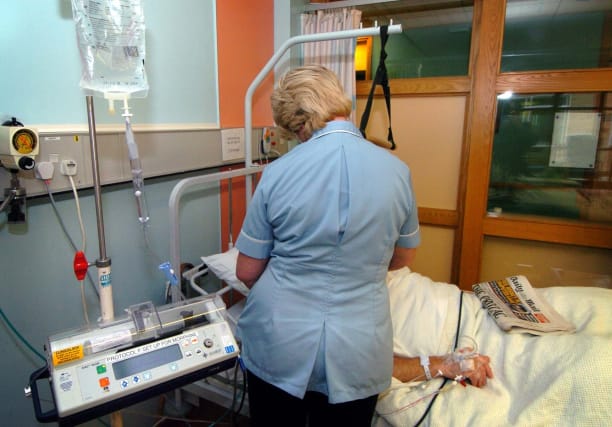 Britain’s nurses are undervalued because of the old-fashioned view that caring is a “feminine characteristic”, a report argues.

This persisting attitude has contributed to suppressing nurses’ wages and status for generations, according to researchers from the Royal College of Nursing and Oxford Brookes University.

They said severe workforce shortages will continue unless they are boosted.

The average pay for a nurse is £15.42 per hour – less than a third of what is pocketed by doctors and dentists, according to the report.

Roughly 90% of nurses in the UK are women.

The authors said nurses “routinely take on tasks that would have previously been the preserve of doctors” and employers are increasingly relying on their goodwill.

Dr Anne Laure Humbert, director of the Centre for Diversity Policy Research and Practice at Oxford Brookes University and one of the authors of the report, said: “Despite the growing complexity and technical nature of the work, as well as the difficult emotional labour it entails, ‘old-fashioned’ perceptions persist of nursing as a job carried out by women for whom caring is ‘natural’, thus deskilling and devaluing those involved.

“We see care as a naturally feminine skill or characteristic. This sits in direct opposition to the high level of skills and professionalisation required in contemporary nursing.”

Dr Kate Clayton-Hathway, research fellow at Oxford Brookes University, said: “Nursing suffers from an image that fails to match the reality of a professional life defined by high-level technical, emotional and cognitive skills.

“This image, which is underpinned by gendered notions of nursing and nurses, will always stand in the way of any efforts to improve the standing and attractiveness of nursing as a career.”

Roles that require high levels of empathy and resourcefulness are likely to become increasingly valued, the authors said, with artificial intelligence and robots likely to play a greater part in other areas.

Rachael McIlroy, RCN senior research lead, said: “This report is an important step in challenging and changing perceptions about nursing.

“In reality, nursing is a complex and skilled profession, yet too often nurses feel their voices are unheard and their value unrecognised.”