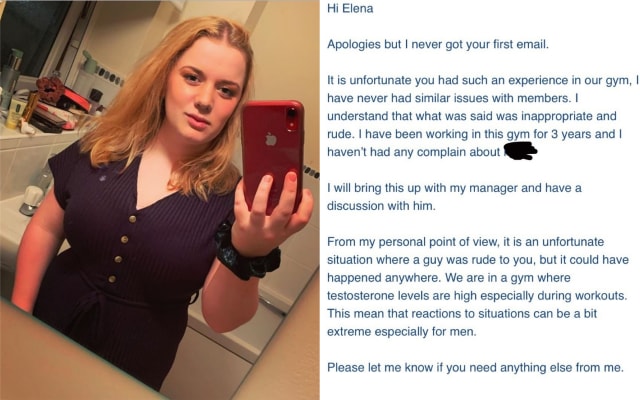 A former Conservative councillor who complained about being harassed by a man while working out at a gym was told by management the incident was down to testosterone.

Elena Bunbury, 22, said she was was changing weights on the leg press machine at Gymbox in Stratford, east London, when a man said he would have to "jump in" because she was taking too long between sets.

Ms Bunbury said that when she and her friend stood their ground, he laughed, called them "pathetic", threw weights on the floor and stared at them as they continued to work out.

When Ms Bunbury complained to the gym via email, she received a response from a female member of staff who said she had never experienced anything similar and that because "testosterone levels are high" at the gym "reactions can be a bit extreme, especially for men".

"It genuinely shocked me," Ms Bunbury, a former member of Holme Valley parish council who now works for the Conservative Party, told the PA news agency.

"I actually physically laughed out loud because I was like 'what on earth is this?' And the fact that it was a woman shocked me even more. I was essentially mansplained by a woman.

"The fact that she started by telling me it's never happened to her, I was like 'great, what's that got to do with me?' And the fact that she then went on to patronise me and explain that men have testosterone – it's just ridiculous that she thinks that sort of behaviour can be justified."

The email from Gymbox read: "From my personal point of view, it is an unfortunate situation where a guy was rude to you, but it could have happened anywhere.

"We are in a gym where testosterone levels are high, especially during workouts. This mean that reactions to situations can be a bit extreme especially for men."

Ms Bunbury, who is a regular rugby player, shared the email on Twitter and her tweet quickly caught the attention of gym users, who sent messages of support.

She has also received a further response and an apology from Gymbox – but she insists she will not be going back.

"It just isn't comfortable," she said. "The fact that the staff member almost seems to be siding with him is what put me off."

She has asked to have her one-year contract cancelled and her money refunded.

In a statement, Gymbox said: "We expect all members and guests to conduct themselves in a respectful manner and we will fully investigate this incident.

"We have also addressed with our team member involved her response to the complaint and we will be retraining all our team members on how they handle a situation like this should it occur again."

Ms Bunbury said she hopes staff at the gym will learn from the incident.

"Parking the man's attitude aside, it's about how that behaviour is responded to," she said.

"You're always going to get people who behave like that in all walks of life, but it's about how you then educate them.

"I'm not here to be judge, jury and executioner, I'm not like 'I need him to be banned', I just want people to be educated in proper etiquette."