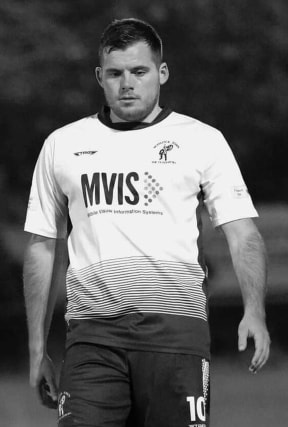 A non-league footballer killed in a late-night attack was the “best person” who would only ever shout on the pitch, his brother has said.

Jordan Sinnott, 25, who played for Matlock Town FC, was found with a suspected fractured skull following a disturbance in Retford, Nottinghamshire, early on Saturday morning.

He was discovered unconscious in the town’s Market Place at 2am, but died in hospital shortly before 6pm on Saturday, Nottinghamshire Police said.

A 21-year-old man has been arrested on suspicion of murder and police are continuing to question two other suspects, both also 21.

A 20-year-old man has been released without charge.

Speaking on BBC Radio 1’s Newsbeat, the footballer’s elder brother Tom said: “There’s not enough words to describe him. Out of everyone he was the best person I’d ever known.”

While holding back tears he said: “We never had a fight, we never raised voices to each other. I don’t think I’ve ever heard him shout to be honest, unless it was on the football pitch.”

He described his brother as someone with “so much love”.

Mr Sinnott said he came up with the idea of getting all the clubs Jordan had played for, including Bury and Halifax Town, to donate football shirts with his name on them to put on display at the funeral.

Asked why, Mr Sinnott said he knew how much his brother loved football and he thought it would be a way to “remember everything good about him”.

“From that the idea kind of snowballed,” he said.Another close friend then suggested they start a “WhatsApp group with all of Jord’s mates in the football community and they all pulled together and said no worries we’re on it.”

And within an hour Jordan’s friends had managed to “secure” Premier League, Scottish and non-league clubs to donate shirts, which would be later be handed over to Sports Relief.

Nottinghamshire Police have urged witnesses with information to come forward.