Duke of York: What happens next? 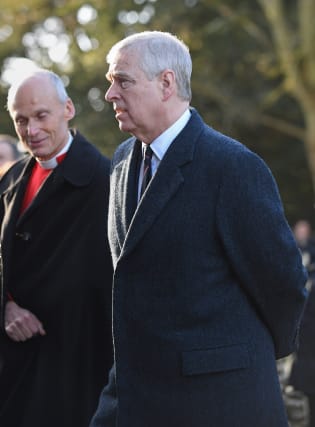 With the Duke of York accused of offering “zero cooperation” in the Jeffrey Epstein sex trafficking investigation, what happens next?

– Who wants to interview him?

US prosecutors and the FBI have contacted Andrew’s lawyers requesting to interview him.

Also lawyers for five alleged victims of Jeffrey Epstein want the duke to provide testimony in their civil cases, claiming Andrew witnessed people being given massages at the disgraced financier’s homes.

– What is the investigation looking at?

US Attorney Geoffrey Berman said the investigation is looking at possible “conspirators” who worked with Epstein.

Virginia Giuffre, who claims she was trafficked by Epstein, alleges the duke slept with her on three separate occasions, twice while she was underage.

– What did Andrew vow to do?

In his statement when he stepped down from royal duties in November, he said: “I am willing to help any appropriate law enforcement agency.”

– Does he have to agree to be interviewed?

No. It is entirely voluntarily at this stage.

– What could happen next?

If Andrew decides not to give evidence voluntarily, the US authorities could make a Mutual Legal Assistance (MLA) request to the UK, a formal process that allows co-operation between states when evidence needs to be gathered in a prosecution or investigation of criminal offences.

– Would a Mutual Legal Assistance request be approved?

Not necessarily. The Home Office would have to decide whether or not to agree to the request – it is not automatic.

There are a large number of grounds it could be refused, such as if it is considered to impair sovereignty, security or other essential interests, or if it is contrary to important public policy.

Initial developments could happen behind the scenes because the UK’s policy is not to confirm nor deny that an MLA request has been made.

– What would an MLA mean for Andrew?

If the FBI is treating the duke as a witness, it could ask for him to be compelled to go to a UK court to give evidence under oath.

If he was being treated as a potential suspect, or received legal advice he might incriminate himself, he would have privilege against self-incrimination.

So Andrew would have to appear at court, but could not be compelled to give evidence.

– Would this be in open court?

It would be up to the judge in the UK to decide whether this would take place in open court.

In practical terms, when it is known an individual has been advised not to incriminate themselves, the MLA request will not be made.

The duke’s lawyers could challenge which evidence should be transmitted back to the US.

– Could Andrew be extradited to the US?

The Home Office would have to decide whether it was a lawful request or whether an extradition should be refused, with the case going to a magistrates’ court if it proceeds.

Andrew would then have to decide whether to be extradited voluntarily or whether to challenge it.

– Can the duke travel to the US?

The US is most likely considered out of the question for the duke now.

Once he is on US soil, he is subject to US law and if an arrest warrant was issued, he would be liable for arrest.

– What happens if the duke now agrees to be interviewed voluntarily instead?

If the duke is willing to comply with the FBI’s request, it would arrange, through the duke’s lawyers, a date, time and place to speak to him, or he could request to answer written questions.

This voluntary arrangement means US investigators can travel to the UK without having to follow any formal procedures.

But as a courtesy they will notify the National Crime Agency that they will be conducting part of their investigation on UK soil.

– Where would the meeting take place?

The duke could make his statement at a number of venues, from the US embassy in London to a lawyer’s office and potentially even a royal residence like Buckingham Palace.

But he would be likely to pick somewhere he feels most comfortable.

– What would happen during the meeting when a statement is taken?

Andrew’s lawyers would be likely to advise him to take some control of the process.

So he could request the questions in advance, and ask whether he is being considered as a witness or potential suspect.

The duke would also need to clarify what his rights are under US law in relation to the statement he would be giving.

– Would the process end there?

No, the FBI could request further interviews to ask follow-up questions, if the investigation develops and new leads come to light.

But at some point, Andrew’s legal team will want what is known as a “letter of comfort” from the US authorities, saying he is not a person of interest to the investigation and is a “witness of fact” only.

– Why is the Metropolitan Police not investigating the allegations?

The Metropolitan Police said it reviewed its previous decision that it was “not the appropriate authority to conduct enquiries in these circumstances” following Epstein’s death in August, and that its position remained unchanged.

The force said officers had spoken to other law enforcement agencies, but have “not received a formal request asking for assistance”.

– Can the lawyers representing some of Jeffrey Epstein’s alleged victims take part in the interview process?

No, as they are involved in a civil matter – claims for damages made against Epstein’s estate.

But they could ask the FBI to share the results of an interview with Andrew. The duke may be advised to ask if his statement will be shared with these lawyers.

– Could the duke be made to provide testimony in the lawsuits against Epstein’s estate?

Pre-trial subpoenas for witnesses have already been prepared in each of the five cases, according to BBC Panorama, and these could be served on Andrew were he to return to the US, at which point they would have to be signed off by a judge.

The duke could challenge the subpoena in court if he wanted to decline to give evidence.

He has denied witnessing any suspicious behaviour by Epstein.