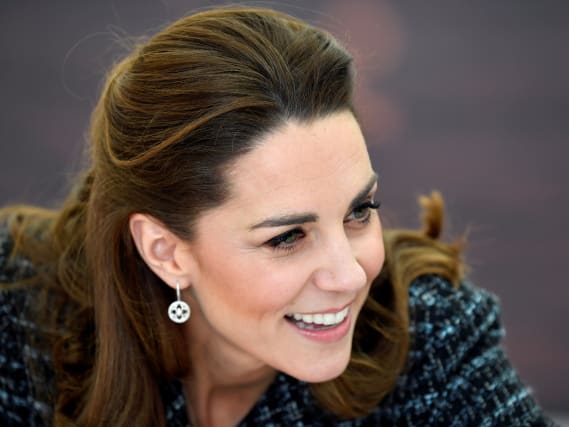 The Duchess of Cambridge was quizzed about the length of time it took her husband to propose when she met youngsters benefiting from creative arts workshops in a children's hospital.

William asked Kate to marry him after the couple had been dating for around eight years – asking her to be his wife in the romantic setting of Kenya.

Sarah Ibendahl brought up the subject and sympathised with the duchess, as it took her husband Ralph the same length of time before he asked her to tie the knot.

Kate met the mother during a visit to the Evelina London Children's Hospital in central London, to learn about the creative workshops run by the National Portrait Gallery for young patients and their siblings.

When she first arrived, the blustery wind threatened to whip up the skirt of her Dolce & Gabbana tweed suit, and she pulled a face of surprise as she held it down.

After a brief indoor walkabout meeting families in the hospital's reception, she sat down with children and art educators in the hospital's third-floor atrium, as they created characters for a paper stage using Polaroid photographs of themselves – and the royal posed for an instant picture.

Mrs Ibendahl, from Blackheath, south-east London – whose three-year-old son Benjamin is being treated for an auto-immune condition, said after meeting the duchess on a ward: "We also bonded over the fact it took our husbands like nine years before they asked us to marry them.

"When I mentioned it she laughed politely and gave a knowing smile."

William and Kate met as students at St Andrews University in 2001 but did not start dating until a few years later – and the duke proposed to his then girlfriend in October 2010, with the couple marrying the following year.

Mrs Ibendahl explained how her son had a slight cold which developed into an auto-immune disease, which has meant he has lost the use of his legs.

She said: "He's having ongoing treatment, it takes them a while to stop the pain, stop the disease progressing and for them to remember how to walk.

"Almost everyone makes a full recovery, it just takes time."