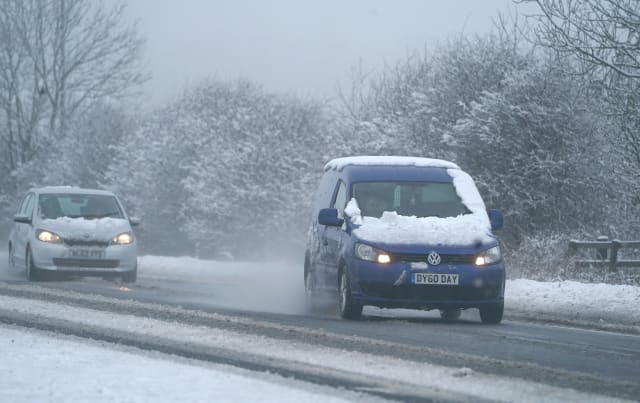 Motorists were stranded on a motorway for hours overnight as snow and ice hit some areas of the country.

Part of the M74 was shut, with some motorists reporting on social media that they were stuck for several hours.

The Met Office issued yellow warnings of snow and ice for most of the country and an ice warning for the north-east, which were valid until 11am on Tuesday.

It warned snow and ice may cause disruption, with snow likely on higher ground.

Police said the M74 was shut between junctions 14 and 15 northbound for a time overnight but was passable with care on Tuesday morning.

After leaving Dumfries just after 9pm on Monday she arrived home at about 3.30am, a journey which normally takes around an hour and a half

She told the PA news agency: “When I left Dumfries on the A701 the driving conditions were worsening by the minute.

“I was hoping I could get to the M74 because I thought it was going to be clearer than the A road I had been on and when I got to the M74 it was OK and you could follow someone else’s tracks but then it just came to an absolute grinding halt because visibility was so poor and the cars all came to a standstill.

“I had stuff in the car like blankets so it was just a case of waiting.”

She added: “I thought we were going to be there all night so I turned off the engine and layered up.

“It was an eye-opening and terrifying experience.”

Traffic eventually started moving again, though slowly, at around 2am after a gritter went past and she reached home in Glasgow at about 3.30am.

She urged people to make sure they have blankets, food and something to drink stored in their car in case they ever find themselves in a similar situation.

Traffic Scotland said there were very snowy conditions across the trunk roads network on Tuesday morning and advised people to drive with care.

Police in southern Scotland advised people to leave extra time for their journey and drive according to the conditions.