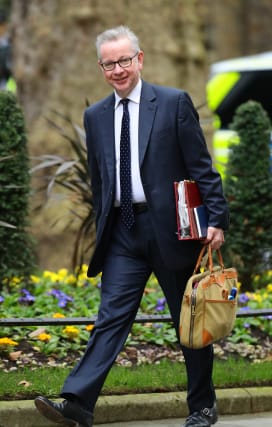 Wales, Scotland and Northern Ireland will have a say on future EU trade talks, Michael Gove said as he defended the UK Government’s decision to press ahead with Brexit despite the devolved administrations’ rejection of the Bill.

The Chancellor of the Duchy of Lancaster was speaking after attending the Joint Ministerial Committee (JMC) meeting in Cardiff between members of the UK Government and the devolved nations to discuss the UK’s relationship with the EU following its departure from the bloc.

Mr Gove rejected suggestions the meeting was in crisis after the UK Government said it would press ahead with Brexit despite the Withdrawal Agreement being rejected by the Welsh Assembly, Scottish Parliament and Northern Ireland Assembly.

He said: “We paid close attention to the arguments that were made, for example by the representatives in Scottish politics about the importance of making sure that we’re outside the Common Fisheries Policy.

“We paid close attention to the arguments that have been made by people in Welsh politics about having a responsive approach to state aid.

“There’s a reason why parliaments and assemblies have voted like they did, but the most important thing to bear in mind is the British people voted to leave the EU.

“What parliaments chose to do was a matter for them, but it was important that the UK Government honoured the democratic mandate.”

Mr Gove said the devolved nations would “absolutely” have a say in future trade negotiations.

But the Scottish Government’s Cabinet Secretary for Constitutional Relations Mike Russell said he had not heard enough during the meeting about the arrangements the UK Government is making with the EU for trade access.

Mr Russell said: “We heard a little more than we’ve heard before, but a lot more is coming out of Europe about their position, and I think that is a common thread between the devolved administrations.

“We need to know more, we need to see more material, and the UK Government needs to listen more.”

Mr Russell criticised Westminster for ignoring the devolved administrations’ rejection of the Brexit Bill, saying: “It’s one thing to say, ‘We’re going to do it’, it’s quite another thing to say, ‘Will you agree’, you say no, and they say, ‘Well, we’re doing it anyway’.”

Welsh First Minister Mark Drakeford said those opposed to Brexit “could not draw comfort” from the meeting.

He said: “We’re leaving the EU and so much after that remains unknown.

“The Prime Minister’s get Brexit done mantra was nonsense from the beginning.

“We will leave on the 31st and we will find out on February 1 that most of the things we need to talk about are still there to be talked about.

“The prospect for the next six months is difficult. The dangers are still there.”

But Mr Drakeford said there had been recognition shown that crafting a future relationship with the EU “needs to be done by agreement across the governments of the UK as opposed to them going solo”.

The meeting also saw Northern Ireland First Minister Arlene Foster and Deputy First Minister Michelle O’Neill together at the JMC for the first time since 2017.