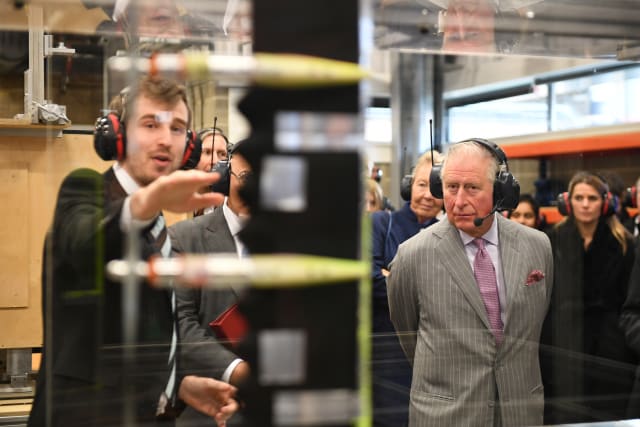 The Prince of Wales learned about work to develop eco-friendly planes as he toured a power research laboratory at Cambridge University.

Charles heard about the latest advances in the decarbonisation of flight on Tuesday’s visit to the Whittle Laboratory.

He donned ear defenders as he was shown a wind tunnel test of a prototype plane component.

The prince also listened to a series of talks from engineers as he toured the facility.

The Whittle Laboratory was opened in 1973 by Sir Frank Whittle, whose original designs led to the development of today’s highly efficient systems that can power huge aircraft over long distances.

Over the past 50 years, the Whittle Laboratory has built industry partnerships with Rolls-Royce, Mitsubishi Heavy Industries and Siemens and played a crucial role in shaping the propulsion and power sectors.

The laboratory is collaborating with the University of Cambridge Institute for Sustainability Leadership, of which Charles is royal founding patron, to raise the profile of the lab’s efforts to develop a world-first zero-carbon flight, to inspire greater industry ambition.

It is also working on technologies to enable decarbonisation across aviation and other sectors, and the innovations required to decarbonise the aviation industry to net zero by 2050.

The new National Centre for Propulsion and Power is to be built alongside the lab and is due to open in 2022 with funding from the Aerospace Technology Institute.

It is designed to revolutionise technology development, making the process at least 10 times faster and cheaper.

It is aiming for rapid development for ultra-low emission aircraft and low carbon power generation, to cover around 80% of the UK’s future aerodynamic technology needs.