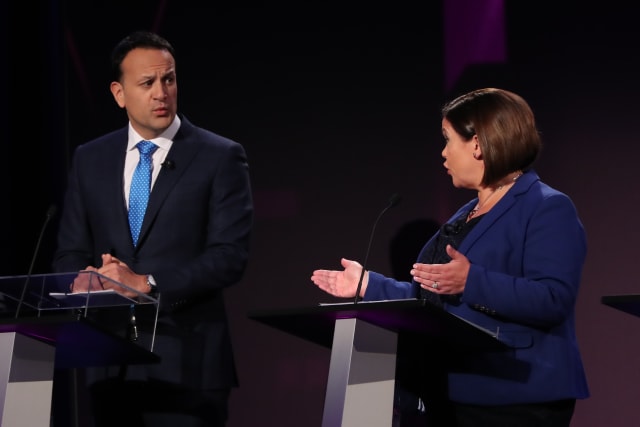 The live RTE debate involving seven party leaders saw Fine Gael and Fianna Fail challenged over why both say they are not considering a potential coalition government with Sinn Fein following the Irish General Election.

Mrs McDonald accused Fine Gael and Fianna Fail of “arrogance” and “hypocrisy” by ruling out her party as coalition partners.

“There is something incredibly arrogant, obvious even, when leaders of other parties believe that we can be disregarded,” she said.

“It is also deeply hypocritical of course because those same party leaders go up and warmly shake the hand of Sinn Fein ministers in government in the north.

“At the end of the election I will speak to everybody, I will listen to everybody and my objective will be to deliver a republican programme for government.”

“It is entirely based on policy and principles and the reason why my party wouldn’t be in a position to form a coalition with Sinn Fein is that in our view, Sinn Fein is soft on crime and high on taxes, for example doesn’t support the Special Criminal Court, the court that we are going to use to lock up some of the drug lords that are causing some of the violent crime that we are seeing around the country at the moment, and they are also a party that consistently looks for higher taxes on business and on incomes, and we don’t think that is the right way to go,” he said.

Mr Martin responded to Mrs McDonald, saying: “The reason why Sinn Fein have opposed the Offences Against the State Act and the Special Criminal Court year after year since they came into the Dail is because the Provisionals within their movement wouldn’t allow them to vote for it.