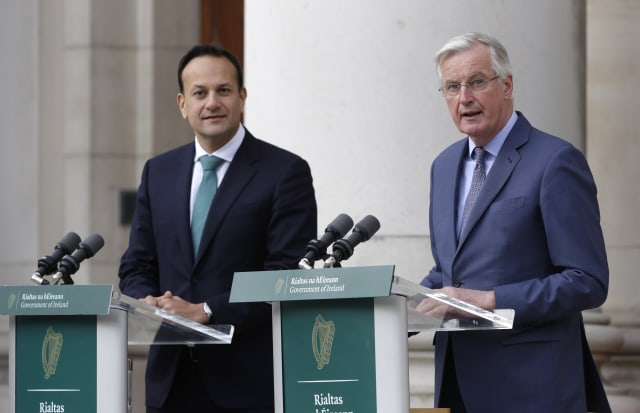 Negotiations on the UK and EU’s future relationship does not have to be a contest with winners and losers, Ireland’s premier has insisted.

Mr Varadkar also made clear there will always be a place for the UK at the EU table if Brexit does not work out well.

After his meeting with Mr Barnier at Government Buildings, Mr Varadkar was asked about comments in a TV interview when he used a football analogy to suggest the EU would have the “stronger team” in the negotiations.

“Ireland will be friends to the United Kingdom into the future, we want to be friends with our nearest neighbour,” he replied.

“But there should be no doubt that we are on ‘Team EU’, we are part of the 27 and maintain solidarity with all the member states and European institutions that showed solidarity with us over the past two or three years.

“I think if you see this as a contest, the European Union is in a very strong position – we’re 27 countries, we have a population of 450 million people and the single market is the largest economy in the world.

“But I don’t think we have to see it as a contest. There is a possibility for us to work together with the United Kingdom over the next few months and come to a future relationship and a trade agreement that’s mutually beneficial, and that’s the spirit in which we will be entering these talks.”

Mr Barnier said he would present EU member states with a draft negotiating mandate next month ahead of March’s EU Council summit, where the bloc’s finalised stance on talks will be ratified.

Mr Barnier said the UK’s level of access to the single market would be proportionate to the commitments Britain gave to comply with EU regulations.

“It’s time for the second round,” he said of the negotiations.

“This time it is very short, (we) have no time to lose in any politics. I always worked with everybody in UK with respect and I will continue.”

Prime Minister Boris Johnson has repeatedly ruled out requesting an extension to the transition period, during which the UK abides by EU rules, to facilitate further talks.

Mr Barnier said if no agreement was reached by the end of the year it “cannot be business as usual”.

“We are to face a risk of a cliff edge, in particular for trade,” he added.

“We will use this time maintaining our line, protecting our interests, our principles and always willing to build the strong and ambitious partnership.

“The UK is there as a friend and an ally for our common security and economic partners.”

Mr Varadkar, who reiterated his own concerns about being able to strike a deal by December 31, said the UK would be welcomed back into the EU if it ever wanted to return.

“On Friday, the United Kingdom is leaving the European Union, we’ll say goodbye to an old friend embarking on an adventure,” he said.

“We hope it works out for them. But if it does not, there will always be a seat kept for them at the table.”

Ahead of the meeting with Mr Barnier, the Taoiseach told the BBC the EU would enter talks in a stronger position than the UK.

“The European Union is a union of 27 member states. The UK is only one country. And we have a population and a market of 450 million people,” he said.

“The UK, it’s about 60 (million). So if these were two teams up against each other playing football, who do you think has the stronger team?”

“I think I used the term strong hand rather than upper hand,” he said.

In the BBC interview, Mr Varadkar also warned against a “piecemeal” approach to the talks, with the UK wishing to only focus on certain aspects of the future relationship.

“When I hear people talk about piecemeal, it sounds a bit like cake and eat it,” he said. “That isn’t something that will fly in Europe.”

The Taoiseach also told the BBC that the UK’s colonial history may have led politicians to misunderstand the way the EU worked in the 21st century.

“I think there are people in Britain who thought that France, Germany and Britain would get together at a big summit and tell the smaller countries what’s what,” he said.

“That is not the way the 21st century works.”

Asked about his meeting with Mr Johnson on the Wirral last autumn – an encounter seen as vital in securing a Brexit breakthrough – Mr Varadkar said the chance for the two men to sit down and “talk turkey” in the absence of officials had been key.

Amid claims from Mr Johnson that the deal will not involve checks on goods entering Northern Ireland from Great Britain, Mr Varadkar said the Withdrawal Deal stated in “black and white” that some checks would be required.

After his meeting in Dublin, Mr Barnier said the Withdrawal Agreement would not have been possible without the unified approach of people and politicians in Ireland.

He singled out Mr Varadkar and his team for particular praise.

“So the moment has finally come – the UK leaving the EU on Friday,” he said.

“Thankfully, it is leaving with a deal. It was not easy to get here.”

Asked about the forthcoming Irish General Election, Mr Barnier insisted a change in government would not impact his working relationship with Ireland.

“I will work with the government chosen by the citizens,” he said.