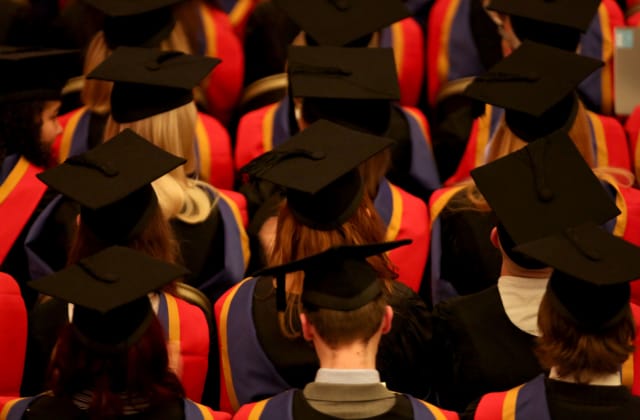 The UK’s leading universities should significantly reduce the gap between disadvantaged young people and their more advantaged peers taking degree places – or face possible financial penalties, a watchdog has said.

The most selective institutions have agreed tough targets with the Office for Students (OfS) for the next five years as part of attempts to improve access.

But it has prompted concern from independent schools who said the move could work against the more advantaged and “rob” them of a future.

The OfS said access to university has been a “postcode lottery” in the past, with young people from some English regions such as the South West much less likely to go into higher education.

The situation is worse among the universities that ask for the highest entry grades, it said.

Youngsters from the most advantaged areas of England are more than six times as likely as their less advantaged peers to go to one of the most selective institutions, analysis by the OfS found.

If these universities meet tough new access targets the gulf will shrink over the next five years to less than four times as likely, the regulator said.

OfS chairman Sir Michael Barber said: “I welcome the ambitious commitments universities are making to change this state of affairs.

“What is an assumed rite of passage for many young people across the country is often viewed very differently in rural and coastal communities, the industrial heartlands and military towns.

“The North-South divide crops up in many debates around equal opportunities, and higher education is no exception.”

He added that in London, 54% of young people go into higher education, but in the North East of England it is 39% and in the South West it is 37%.

Mike Buchanan, executive director of HMC (the Headmasters’ and Headmistresses’ Conference), which represents 296 leading private schools, warned the move to improve access for disadvantaged students could in turn lead to discrimination against those who are better off.

He said: “Care is needed in starting actively to discriminate against individual young people on the basis of the class they were born into.

“The country needs all its young people to reach their potential if we are to create a bright new future for Britain post-Brexit.

“We urge the Government to enable universities and colleges to expand to take as many truly suitable students as necessary, rather than rob some students of a future to award it to others.

“Universities should also look at the increasing numbers of high-paying international students they are accepting, rather than deny places to UK students based on their class.”

Under rules brought in when tuition fees were trebled to a maximum of £9,250 a year, institutions that want to charge the top rates must have access agreements signed off by the OfS.

These agreements contain targets on areas such as recruitment of under-represented groups, dropout rates and gaps in degree achievement between students.

Individual agreements show the commitments universities have made.

Chris Millward, OfS director of fair access and participation, said that if universities do not meet their pledges, the regulator will decide whether they have taken enough action to do so.

Universities found to have failed to improve access can face sanctions including fines.

No institution has yet been fined for this reason.

Mr Millward said the extent of any “displacement” of more advantaged students will depend on whether universities decide to grow their numbers to help improve access.

“I would come back to this is about recognising talent from all backgrounds, and currently lots of students from the parts of the country that are being targeted now in these plans are not recognised,” he said.

He added that he understood Oxford and Cambridge are not planning to increase student numbers.

An Oxford University spokesman said: “More than 69% of undergraduate offers were made to pupils attending state schools, and a record number to those from under-represented backgrounds.

“The changes we have brought in, with widespread support across the university and its colleges, have increased and diversified the pool of students applying to and receiving offers from Oxford.”