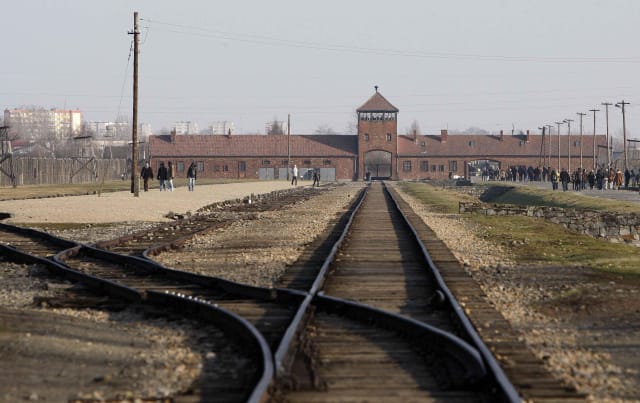 More than 200 Holocaust survivors have returned to Auschwitz to mark 75 years since the Nazi death camp was liberated.

Survivors were joined by dignitaries including the Duchess of Cornwall for commemorations at the former camp on Monday, Holocaust Memorial Day.

Camilla joined others from across the world for the service, which was held in a tent erected around the camp’s gate house, referred to as the Gate Of Death by prisoners.

Following the ceremony, those attending walked 700m alongside the railway lines which brought prisoners to Auschwitz.

At the end of the walk, candles were placed at the main monument to pay tribute to victims of the Holocaust.

Speaking before the ceremony, chief executive of the Holocaust Educational Trust Karen Pollock said: “Survivors will be standing in the space where many of them were parted from their families for the last time so it will be powerful and overwhelming.

“I think all of this will be sending a strong and powerful message to the world that this is important, it matters that we remember.”

Among the survivors was Renee Salt, 90, who travelled from her home in London to return to the camp where she was taken aged 15.

Mrs Salt, who returns to the camp regularly to tell visitors her story, told the PA news agency: “The first few times I went it felt terrible, I was shaking all the time I was so nervous.

“But, you get used to anything.”

She saw her father for the last time after arriving at the camp in 1944, aged 15.

She said: “He jumped off the train, I jumped after him and by the time I got off he had disappeared like into thin air.

“I never saw him again. He went without a kiss, without a goodbye, he just disappeared.”

Also there to mark the anniversary was Hannah Lewis, who was born in Poland in 1937 and forced to march to a labour camp in 1943.

Her mother was shot by German police in the camp, where Mrs Lewis, 82, stayed until she was liberated by a Soviet soldier.

She later moved to London to live with her great aunt and uncle.

Mrs Salt and Mrs Lewis, who both work with the Holocaust Education Trust, joined the UK delegation at Auschwitz on Monday, which was was led by the duchess and also included Lord Eric Pickles, the UK Post-Holocaust Envoy, as well as Mayor of London Sadiq Khan and representatives of the Jewish community in the UK.

More than 40 national delegations from across the world attended the ceremony.

Polish president Andrzej Duda, who refused to attend a commemoration event in Jerusalem last week after complaining he had not been allowed to speak, delivered a welcome address at the service.

The ceremony also included speeches from survivors of the camp, as well as prayers.

Else Baker, who now lives in Britain, said she had been taken to Auschwitz aged eight because the Nazis considered her a gypsy.

In a speech, Ms Baker, who is blind, said: “In times like this when minorities have to feel vulnerable again, I can only hope that everyone would stand up for democracy and human rights.”

Ronald Lauder, president of the World Jewish Congress, gave a speech in which he condemned a rise in anti-Semitism.

He said: “In 2020 we hear the same lies the Nazis used so effectively in propaganda.

“We will never eradicate anti-Semitism, it is a deadly virus that has been with us over 2,000 years, but we can not look the other way and pretend it’s not happening.

“That’s what people did throughout the 1930s and that’s what led to Auschwitz.”

Auschwitz-Birkenau, the largest of the Nazi concentration camps, was established in 1940 in German-occupied Poland, near the city of Oswiecim.

More than 1.1 million men, women and children died there, of whom an estimated one million were Jewish.

Auschwitz was liberated on January 27 1945 when Soviet soldiers reached the camp.