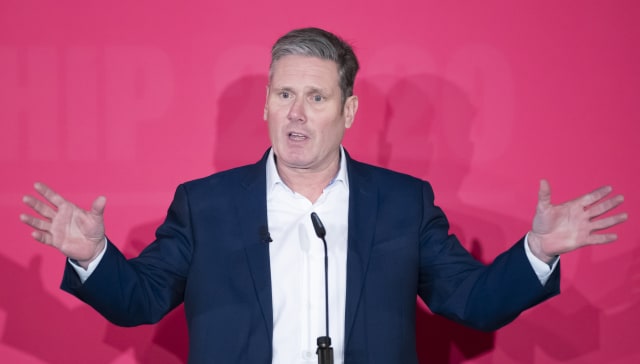 The early front-runner for the top job has been endorsed by the Community union.

Community general secretary Roy Rickhuss said of Sir Keir: "His experience and vision are what the Labour Party needs to rebuild, win back the trust of voters, and lead a transformative Labour government."

Referring to Ms Rayner, Mr Rickhuss said: "We believe she will help unite our fractured party, reinvigorate the Labour movement, and lead us into government."

The union also urged its members in constituency Labour parties (CLPs) to help ensure that Labour's only MP in Scotland, Ian Murray, makes the final ballot for the deputy post.

The only other route on to the ballot is by receiving nominations from at least 5% of CLPs.

Both Unison and Usdaw have already given Sir Keir their backing in the race to replace outgoing leader Jeremy Corbyn in April.

The latest union endorsement came as Sir Keir was calling for a radical redistribution of power, wealth and opportunity as he returned to the Labour leadership campaign trail.

The shadow Brexit secretary was forced to cancel events when his mother-in-law was admitted to hospital following an accident last week.

Resuming campaigning on Monday, he warned that urgent change is necessary to ward off a risk of the break-up of the United Kingdom after the UK leaves the EU.

He was later due to give a speech in east London arguing for a federal system in which power and resources are devolved.

Sir Keir will call for the end of the status quo – and say that power, wealth and opportunity should be "put back into the hands of the people".

The Holborn and St Pancras MP will travel to Scotland, England and Wales in the coming days.

Speaking ahead of a week of campaigning, Sir Keir said: "The status quo is not working. People are crying out for more control, power and say over their own lives and local communities. This can't be delivered by tinkering around the edges or with short-term fixes.

"We need to end the monopoly of power in Westminster and spread it across every town, city, region and nation of the United Kingdom. We have to end the status quo and put power, wealth and opportunity back into the hands of the people.

"We need a new constitutional settlement: a large-scale devolution of power and resources. This will involve building a new long-term political and constitutional consensus. I believe that could best be built on the principle of federalism.

"But this can't just be about handing power from one group of politicians to another. I want to empower people to have a real say in their workplace, in the communities they're part of and over the public services they use.

"We will only repair the shattered trust in politics by letting people take back control of the decisions that affect their lives."