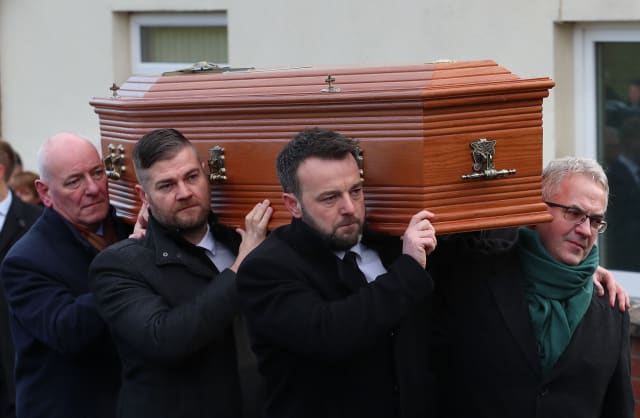 Seamus Mallon’s vision of a shared homeplace should shape Ireland’s future, a close friend has said.

Mr Mallon relentlessly pursued peace and better relations across Northern Ireland’s fractured community during some of the darkest days of the conflict, Tim O’Connor added.

He paid tribute to a “chieftain” of Irish politics who helped make the country a better place.

“The annals will record Seamus Mallon as one of the key leaders of a seminal time in the history of the island of Ireland,” Mr O’Connor said.

He hailed him as an outstanding Irish parliamentary orator ranking alongside the likes of Daniel O’Connell and Charles Stewart Parnell.

“Seamus Mallon was a giant of his time,” he said.

“That is why today, in this beautiful ceremony in this beautiful church, it is important that we take the opportunity to reflect on, and give thanks for, the sacrifice, endurance, courage and leadership of a man whose contribution has meant a better life and future for every single one of us on this island.”

The principal of Mullaghbrack Primary School had led a happy life, devoted to his work, sport, horses, fishing and gardening, but was seen as a leadership figure in the community.

Mr O’Connor, former secretary-general to the president of Ireland, said: “Other drum beats were sounding and getting louder and closer to that happy normal life in Markethill.

“It turned out that destiny and providence had other things in mind for Seamus Mallon.”

His commitment to building better relations with Protestants was evident in one of his final acts, to ask the Rev Tony Davidson to say a prayer at his funeral.

Mr O’Connor said: “That is the essence of the Mallon legacy, the commitment to the shared homeplace, founded on peace, mutual respect and friendship.

“Our prayer today in this beautiful church is that the future of our island north and south will be defined and shaped by that legacy.”

His 20 years as an MP in Newry and Armagh from 1979 covered some of the most bloody of the conflict.

Mr Mallon made a point of going to every Troubles-related funeral in his constituency, Mr O’Connor said.

He added: “The leadership role Seamus played during the darkest days of the Troubles as an almost biblical voice for decency, tolerance, and the relentless pursuit of peace and reconciliation.”

He was the SDLP’s chief negotiator during the peace process.

Mr O’Connor added: “A moral voice, a challenging taskmaster in terms of the key principles that were required as foundation stones, and a particularly central contribution to policing.”

He recalled his friend’s leadership role on legislation which made the overhaul of the Royal Ulster Constabulary envisaged by independent reviewer Chris Patten a reality.

Mr O’Connor said Mr Mallon’s political career was characterised by a refusal to become partisan, his sense of fair play and his fierce and unwavering commitment to non-violence.

His father had told him as a young boy that guns never solved problems.

His friend said: “How profoundly the young Seamus was to take it to heart and how all of us have benefited so richly as a result.”