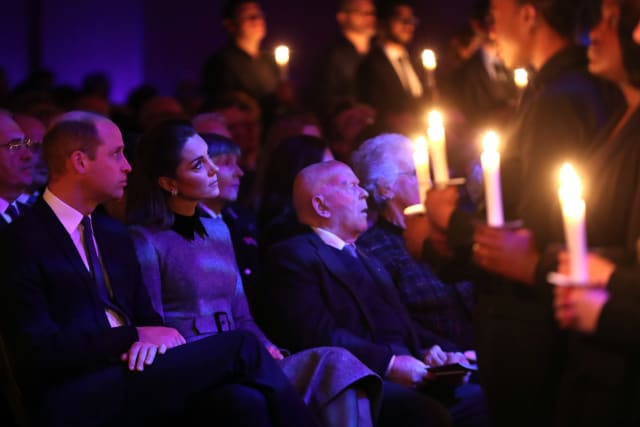 Boris Johnson pledged to stamp out the “virus of anti-Semitism” as he joined the Duke and Duchess of Cambridge on Holocaust Memorial Day, 75 years on from the liberation of the Auschwitz-Birkenau concentration camp.

The Prime Minister and the royal couple were at Central Hall in Westminster for a commemorative service in honour of victims and survivors of Nazi persecution, as well as subsequent genocides in Cambodia, Rwanda, Bosnia and Darfur.

Mr Johnson, addressing the packed hall during a moving ceremony, spoke of the shame he feels at the continued existence of anti-Semitism in the UK.

He said: “I feel a deep sense of shame that here in Britain in 2020 we seem to be dealing with a resurgence of the virus of anti-Semitism, and I know that I carry a responsibility as Prime Minister to do everything possible to stamp it out.”

Vowing to ensure the memory of the horrors of the Holocaust will not be forgotten, he promised that a national Holocaust memorial and education centre will be built “so that future generations can never doubt what happened”.

He added: “Because that is the only way we can be certain that it will never happen again.”

Her bravery was recognised by Israel, which in 1993 posthumously bestowed the title of Righteous Among the Nations on her.

During the service the duke read from a letter written by a friend of the princess.

He said: “The princess put a small two-room apartment on the third floor at the disposal of Mrs Cohen and her daughter. It was thanks to the courageous rescue of Princess Alice that the members of the Cohen family were saved.

“The members of the Cohen family left the residence three weeks after liberation, aware that by virtue of the princess’s generosity and bravery had spared them from the Nazis.”

He was joined by his wife Kate, and survivors of the Holocaust and other more recent genocides, in a candle-lighting ceremony that saw 75 lit in the hall, signifying the number of years since the camp was liberated.

Ahead of Monday’s service Olivia Marks-Woldman, chief executive of the Holocaust Memorial Day Trust, said she was pleased the royal couple had been able to attend the ceremony, alongside members of the UK’s political, civic and faith leadership.

She said: “At a time when we know identity-based hostility is increasing, it is heartening to see so many people stand together, both at the UK ceremony and at more than 10,000 local activities around the country.

“Holocaust Memorial Day is an important opportunity for us all to learn from genocide, for a better future.”

Photographs of survivors taken by the duchess for an exhibition marking 75 years since the end of the Holocaust, were released on Sunday.

Kate, who took the pictures at Kensington Palace earlier this month, has described the survivors in her portraits as “two of the most life-affirming people that I have had the privilege to meet”.

Meanwhile, the Duchess of Cornwall joined more than 200 Holocaust survivors who returned to Auschwitz-Birkenau to commemorate the anniversary of its liberation.

Camilla was among dignitaries from across the world who attended the service in Poland on Monday afternoon.

The ceremony was held in a tent erected around the camp’s gate house, referred to as the Gate of Death by prisoners.

The duchess led the UK delegation, and was joined by camp survivors Renee Salt, 90, and Hannah Lewis, 82.

Holocaust Memorial Day has taken place in Britain since 2001, with a UK event and more than 10,000 local activities taking place on or around this date each year.

The London ceremony is being screened on BBC Two at 7pm.