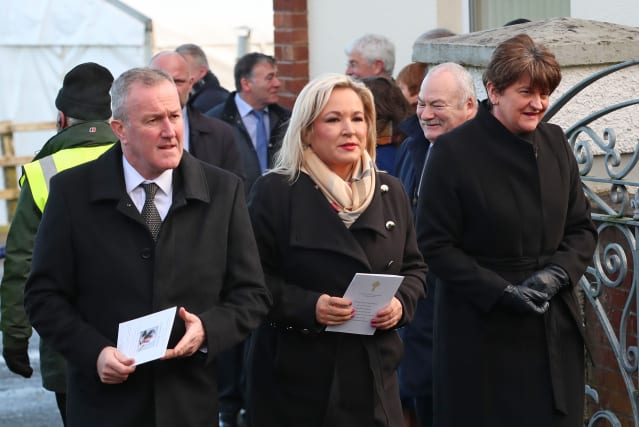 Arlene Foster paid tribute to a man who has been described as stubborn and straight-talking and who could be awkward but was also thoughtful.

The former deputy first minister once denounced as a denial of his humanity the IRA’s killing of a neighbour in his home village of Markethill, a member of the security forces.

He went to every conflict-related funeral in his constituency, even when he was not welcome.

The First Minister paid tribute to his opposition to violence, while working amongst republican supporters of the IRA in the Irish border city of Newry rather than from the relative safety of England or Dublin.

She said: “Northern Ireland and its leaders must carry forward that vision, building a shared future where everyone has a stake and feels at home and working together in the interests of all our people.”

During a meeting of the Stormont Assembly, the current Deputy First Minister Michelle O’Neill said his track record of working to create a better Ireland had left an indelible mark on politics and he had articulated nationalist interests.

She paid tribute to the “critical” role played by Mr Mallon and former SDLP leader John Hume in bringing about the peace process and their courage and risks taken to deliver that peace.

The Stormont Assembly and powersharing was restored earlier this month following a three-year hiatus.

SDLP deputy leader Nichola Mallon said her predecessor in the role had inspired her generation of party activists.

She said: “Seamus was a man of peace, of non-violence, of justice, fairness, truth and of courage.

“The next generation of SDLP politicians will live by Seamus Mallon’s mantra – that is in our DNA – but all of us here would do well to live by Seamus’s judgment of how we share this piece of land.”