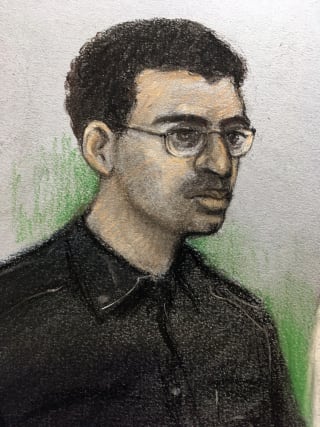 The younger brother of the Manchester Arena bomber has appeared in court ahead of his trial for mass murder.

Hashem Abedi, now 22, was allegedly involved in planning the suicide attack on May 22, 2017.

Before the attack the defendant, who was raised in Manchester, left Britain and travelled to Libya.

He was arrested in Tripoli and extradited to the UK in July last year, to face 22 charges of murder, one count for each victim.

Hashem Abedi also faces a single count of attempted murder, representing all the other victims, and conspiring with his brother to cause explosions.

On Monday he appeared at the Old Bailey for the start of his trial.

The defendant, wearing a dark blue shirt over a white t-shirt, dark blue jeans and black rimmed glasses, spoke only to confirm his identity.

Previously he has denied all the charges against him.

The case, which is due to last eight weeks, was adjourned until Wednesday by Mr Justice Jeremy Baker.

A jury panel has yet to be selected and sworn in to hear the trial, which is due to be opened by prosecutor Duncan Penny QC later in the week.

Loved ones of the victims will be able to hear the evidence in Court Two of London’s Central Criminal Court, or by special video links.