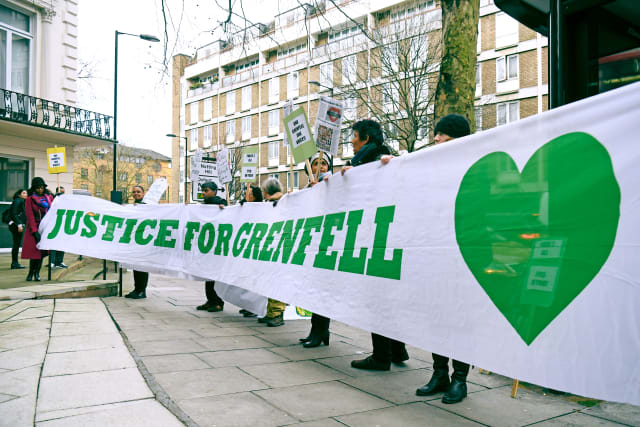 Private firms which refurbished Grenfell Tower have refused to admit any responsibility for the catastrophic fire which killed 72 people, despite experts saying the work failed to meet building regulations, an inquiry has heard.

The second phase of the investigation into the disaster opened on Monday, and the inquiry’s chief lawyer accused corporate companies of pointing the finger at each other without accepting any blame.

Built in 1974, the tower was extensively refurbished between 2012 and 2016, most significantly when flammable aluminium composite material (ACM) cladding was wrapped over its concrete exterior.

The first part of the inquiry found this was the “principal” reason for the rapid spread of flames.

Counsel to the inquiry Richard Millett QC said in his opening remarks: “With the sole exception of RBKC (Royal Borough of Kensington and Chelsea) not a single core participant involved in the primary refurbishment of Grenfell Tower has felt able to make an unqualified submission against their own interests.

“With that solitary exception Mr Chairman, one finds in those detailed and carefully crafted statements no trace of any acceptance of any responsibility for what happened at Grenfell Tower.

“Not from the architects, not from the contract managers, main contractors.

“Any member of the public reading those statements and taking them all at face value would be forced to conclude that everyone involved in the refurbishment of Grenfell Tower did what they were supposed to do and nobody made any serious or causative mistakes.

“All core participants who played a material part in Grenfell Tower have laid out a detailed case that it relied on others and how in no way was the work it did either substandard or non-compliant (with building regulations).

“In every case, what happened was, as each of them would have it, someone else’s fault.”

The second stage of the inquiry will consider how the high-rise block came to be covered in flammable cladding.

Lead refurbishment architects Studio E said it “did not have any knowledge that the products used on the tower were unsafe” and said product manufacturers had “produced materials and testing data which had the effect of misleading designers to consider that their products were safe.”

In a statement to the inquiry it said: “Studio E considers that it acted as would be expected as a reasonably competent architect in its position” and called itself a “conscientious, ethical and responsible” firm.

Rydon, the main contractor, said the providers of the cladding and insulation, Arconic and Celotex, had misled buyers into believing their products were safe for use on high-rises despite appearing to know of the dangers.

An internal report from an Arconic director in 2011 noted the material Reynobond PE was “dangerous on facades and everything should be transferred to (FR) fire resistant as a matter of urgency”, according to counsel for Rydon Marcus Taverner QC.

The email, sent by official Claude Wehrle, added: “This opinion is technical and anti-commercial it seems.”

The email said: “We cannot seem to find or design a suitable barrier in which we have enough confidence that it can be used behind a standard ACM panel which we know will melt and allow fire into the cavity… Or do we take the view that our product realistically shouldn’t be used behind most cladding panels because in the event of a fire it would burn?”

The company marketed its insulation as being suitable for buildings taller than 18 metres after it decided to get into the “lucrative” high-rise market in 2013, Mr Taverner said.

The second phase of the inquiry began at a new venue in Paddington, west London, with a small number of demonstrators playing drums and music outside.

It comes after a member of the inquiry panel resigned after she was linked to a charitable arm of the firm which supplied the tower block’s deadly cladding.

Engineer Benita Mehra resigned on Saturday after it was disclosed she is an immediate past president of the Women’s Engineering Society.

According to the society’s website it last year received funding from Arconic for an apprentice conference.

Michael Mansfield QC, representing victims, said there has been “a stunning silence” from Prime Minister Boris Johnson and the Cabinet Office on the resignation of Ms Mehra from the panel on Saturday.

He added there had been “not a word about whether there is going to be a replacement”.

Mr Mansfield told chairman Sir Martin Moore-Bick it would “lend considerable force to this venture” if he could confirm whether she would be replaced and “what the difficulties are”.

Survivors’ groups have said phase two of the inquiry must focus on who is to blame for the “devastating refurbishment” of the 25-storey building between 2012 and 2016.

Grenfell United, a group representing bereaved families and survivors, hoped the next stage of the inquiry “will expose the people and organisations who put profit and agreed above our safety”.

Seventy-two people died as a result of the blaze at the west London block, after an electrical fault with a fridge freezer sparked an inferno which reduced the building to a charred skeleton.