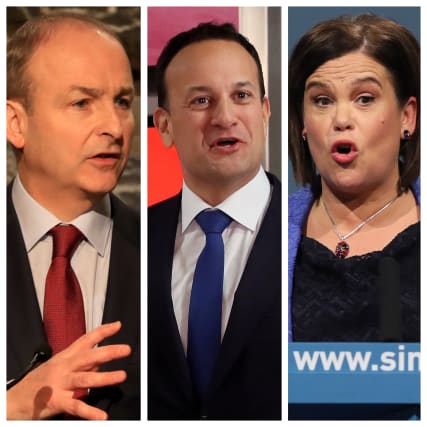 Both Fianna Fail and Fine Gael say they are willing to debate with the Sinn Fein leader despite two possible new dates going unconfirmed.

The three parties were approached by Today FM in the last week, inviting each leader to take part in a live debate on the station.

Sources within the station say the parties were offered February 3 and 4, however only Sinn Fein replied that they would make their leader available.

Both Fine Gael and Fianna Fail say they have not refused the debate, but that the issue arises with the proposed dates, as one of the options clashes with the RTE leaders’ debate on February 4.

A Fianna Fail spokesman told the PA news agency: “We have not declined this or any other debate.

“We are keen to participate in as many debates as possible and want to be part of the Today FM debate, but we are still awaiting confirmation on what date they are proposing.”

Mr Varadkar has already said that he would have no issue with allowing Sinn Fein leader Mary Lou McDonald to take part in a leaders’ debate with him and Fianna Fail leader Micheal Martin.

However Mr Martin has rejected the notion that Sinn Fein should be included in such a debate as they are not fielding enough candidates in the election for Ms McDonald to become Taoiseach.

Debate has become a major issue in the campaign after Sinn Fein found out it would not be included in two head-to-head leaders’ debates with Fianna Fail and Fine Gael.

The party has taken legal advice over whether it has grounds to fight the exclusion from the RTE leaders’ debate on February 4, which will be the second televised debate between Mr Martin and Mr Varadkar.

The first was aired on Virgin Media last week.

Sinn Fein said its polling position, which is within the margin of error to be neck and neck with Mr Varadkar’s party, gives it as much right as Fine Gael to be included in any such debates.

A Sinn Fein spokesman said: “Leo Varadkar claimed in advance of the Virgin Media debate between himself and Micheal Martin that he would have no issue with Mary Lou being added to the debate.

“However, now that another broadcaster has proposed a debate between the leaders of the three big parties, he is suddenly not up for it.

“At least Micheal Martin is straight up about his refusal to take part in such a debate, but this episode shows that both of these party leaders, who have essentially governed together for the past four years, do not want a real debate with the leader of the opposition.”