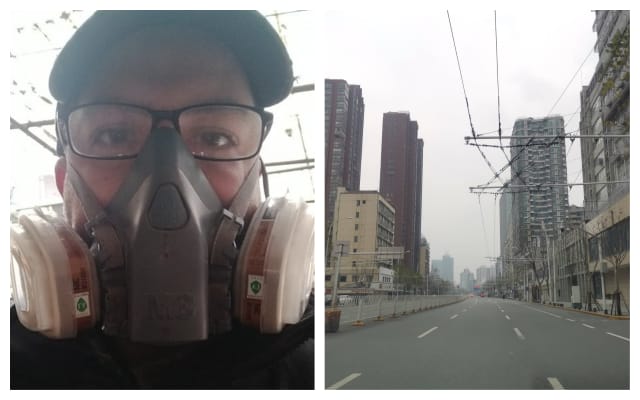 Britons living in Wuhan have described efforts to return to normality despite the city of 11 million remaining on lockdown due to the deadly coronavirus.

As residents faced a ban on public transport and a partial block on the use of cars, expats spoke of eerie scenes on the streets of a usually bustling city.

Chris Hill, a foreign language coach originally from Washington in Tyne and Wear, told the PA news agency he had seen scenes of “panic and chaos” akin to something “you would see in a movie” when shopping at a supermarket in the early stages of the outbreak.

The 38-year-old, who lives around 10 minutes from the market where the outbreak is thought to have originated, said the area “was hell the first two days before the lockdown, with people trying to get out as fast as they could”.

Mr Hill shared a picture of himself wearing a gas mask he had ordered online a year ago, adding: “That’s my protection, I scare so many people with it.”

Asked why he had bought the mask, he said: “A very strange urge. I can’t truly give a reason.”

Despite the earlier panic, Mr Hill said there is still plenty of food available in shops, but added that fruit and vegetables are becoming a “touch and go thing” as supplies are restricted.

He added that he could hear a number of locals near his home on Monday shouting “Wuhanjiayou”, roughly translating as “Wuhan, keep going”.

“The city is standing together as one, showing that nothing can break them,” Mr Hill said.

Another British expat sent PA images of empty streets, and said the city remained “very quiet” when she helped a relative transport goods to the hospital she was working at on Monday.

“My husband and I are doing fine, but I worry that things aren’t as easy for the healthcare workers here,” she said.

China’s Lunar New Year holiday has been extended to prevent people travelling across the country as it aims to contain the virus.

Many workers face uncertainty as to when they will be able to return to work.

“My school has confirmed that we’ll continue to be paid, I think most big companies and state-run companies are the same,” the teacher, who asked not to be named, continued.

“I worry about small business though.”

The Foreign Office has said it is working to get Britons out of China’s Hubei province, in which Wuhan lies, offering a 24-hour helpline for those in need of assistance.

More than 50 people have been tested in the UK for the virus so far, according to Public Health England, with all proving negative.

Another British man, who had travelled to Wuhan to visit his girlfriend, is stuck in the city after his return flight on February 3 was cancelled, and he described trying to get out of the area as “impossible”.

The 29-year-old, who did not want to be named, told PA at the weekend: “There have been sporadic warnings from local government in Chinese to tell us that there will be road closures.

“There is no news on when the airport will reopen, therefore the airline (China Southern) have just cancelled the flight.

“I’ve also had no help from the UK Embassy in Beijing, who are conveniently closed for the weekend.”