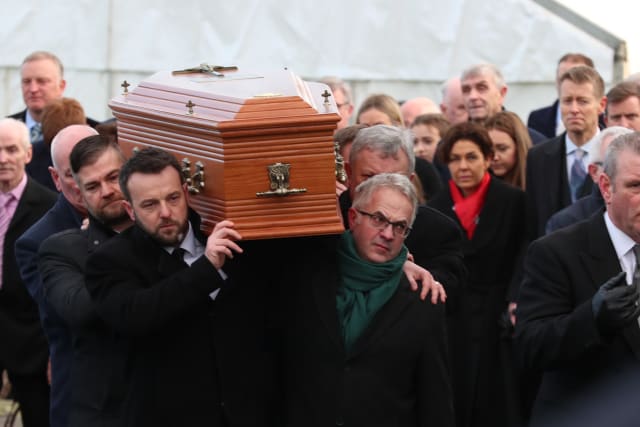 Seamus Mallon was a bridge-builder who dedicated himself to peacemaking, the head of the Catholic Church in Ireland has told mourners at his funeral.

Colleagues of the nationalist SDLP stalwart, including former leaders Mark Durkan and Margaret Ritchie and ex-first minister Lord (David) Trimble, attended the service at St James’ Church near his home in Markethill in rural Co Armagh.

Archbishop of Armagh Eamon Martin said: “Here was a loving father, husband, brother and grandfather. Here was a dedicated Catholic school teacher and principal, a kindly and attentive neighbour, a man of many talents who wasted none of them.

“Here was a wholesome human being who spent himself unselfishly for his family, his local community, his country and for the common good.

“Here was a peacemaker, a ‘bridge-builder’, a leader, a statesman, and a faithful worker for the Kingdom of God.”

Mr Mallon was a former teacher who lived in Markethill, a largely Protestant town, before becoming a politician.

He was a key figure in negotiating the 1998 Good Friday Agreement and, after his death, tributes were paid from across the political divide.

Mr Mallon implemented the newborn political powersharing at the devolved parliament at Stormont and his former partner in government and ex-first minister Lord Trimble said he was a committed democrat who lived up to his word.

Archbishop Martin added: “Seamus Mallon was unequivocally anti-violence. Like (Seamus) Heaney, he saw the ongoing bloodshed of the past as a ‘waste of life’ and a ‘waste of spirit’.

“He empathised from his heart with all those who were suffering and his consistent condemnation of violence from whatever source often left him open to insult and unfair criticism.

“But his principles, rooted in a strong faith and in an unstinting commitment to a culture of life, remained steadfast in face of such opposition.”