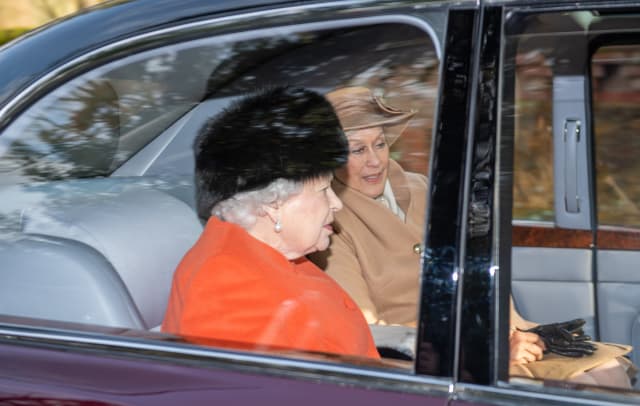 The Queen was joined by the Princess Royal as she attended church in Sandringham.

The 93-year-old opted for a vibrant orange coat for the service at the St Mary Magdalene Church on Sunday morning, where crowds had gathered to catch a glimpse of the royal on her private Norfolk estate.

It follows a week which saw the monarch miss a planned meeting at her local Women's Institute due to a cold.

The Queen's annual appearance at the Sandringham branch of the Women's Institute was called off as she was "not feeling up to it", according to a member of her security team.

After joining the branch in 1943, when she was still Princess Elizabeth, the Queen attends each year as part of her winter stay in Norfolk.

Around half-an-hour before her expected arrival at West Newton Village Hall on Thursday, reporters and photographers were told that she would not be coming this year.

Anne opted for a long navy coat, a grey scarf and a hat with a large feather for the service on Sunday morning.

She walked to the church on foot, joined by former Formula One racing driver Sir Jackie Stewart.

The Queen, who paired the brightly-coloured coat with a black furry hat, fur-trimmed black gloves and a gold brooch, was pictured leaving the venue in a burgundy Rolls-Royce car following the service.

She was accompanied by opera singer Dame Kiri Te Kanawa, who wore a camel-coloured coat and a hat with a large bow.

The singer performed at the wedding of Charles and Diana, Princess of Wales, in 1981.