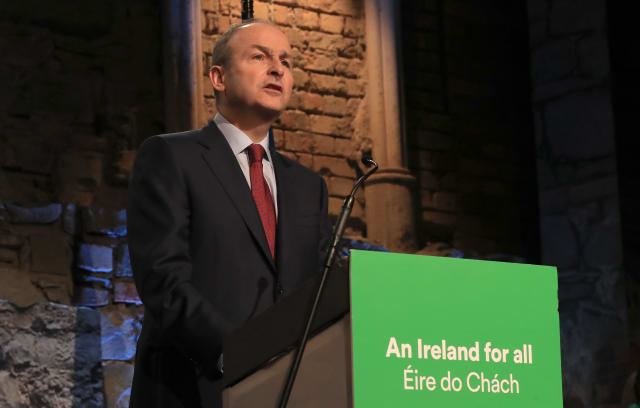 A new poll shows that Fianna Fail remains in the lead to be the majority partner in the next government.

The RED C poll, paid for by the Business Post newspaper, shows Micheal Martin’s party on 26% (+2), while Fine Gael has gone down seven points to 23% and Sinn Fein up by eight to 19%.

In the smaller parties, The Greens are polling at 8%, up one, Labour on 4% and Solidarity-People Before Profit on 2%.

The poll also shows that Independent candidates are feeling the pressure due to Sinn Fein’s popularity. Their support is down by two points to 14%.

The poll sampled 1,000 people from January 16 to January 22, but the fieldwork ended before the first TV debate on Wednesday, and carries a margin of error of 3%.

Health and housing remain major issues throughout the campaign and Sundays’s poll is no different, just 12% of voters trust Fine Gael to manage the housing issue effectively.

In health, no party fared extremely well; 14% of voters polled said they trust Fine Gael on this issue, 24% said they trust Fianna Fail to remedy the much maligned system, and 16% wanted to see Sinn Fein in government to fix it.

In a reflection of their campaign message, Fine Gael is strongest of all the parties on the economy, with around 30% of voters polled saying it was their preference over the issue, compared to 24% backing Fianna Fail’s economic policies and 15% for Sinn Fein.

The poll will be a boost to Sinn Fein, who has been polling strongly throughout the campaign, especially with younger voters, and are at times neck-and-neck with Fine Gael within the margin of error.

If this polling is reflected on February 8, Sinn Fein could be part of a governing coalition, despite both Mr Martin and Fine Gael’s Leo Varadkar ruling out any deal with Mary Lou McDonald’s party.

Sinn Fein’s focus now will likely turn again to its absence from the leader’s debate on RTE on February 4.

The party has taken legal advice over whether they have grounds to fight the exclusion, which will be the second televised debate between Mr Martin and Mr Varadkar.

Sinn Fein said its polling position gives it as much right as Fine Gael to be included in any such debates.