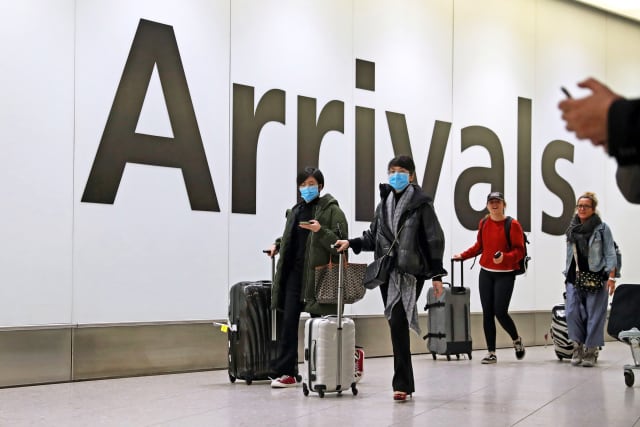 More than 50 people have now been tested for coronavirus in the UK, according to the Department of Health, although all tests have returned negative.

As of Sunday afternoon, some 52 people across England, Wales, Scotland and Northern Ireland have been tested for the deadly flu-like virus.

The current risk to the public remains low, the department said, adding that the Government is continuing to monitor the situation closely.

Britons trapped in the Chinese province at the centre of the outbreak have been urged to leave the area if they are able to do so.

Home Secretary Priti Patel said the Government was “looking at all options” to help Britons leave Wuhan following reports that officials have been asked to examine the logistics for an airlift from the city.

One academic told the Guardian his “best guess” was that 100,000 people had been infected with the flu-like virus.

“Unless the Chinese manage to control this, and I’m sceptical about whether that is possible, we will get cases here.”

It comes as spectators celebrated Chinese New Year in central London, which mark the start of the Year of the Rat.

Authorities in China have cancelled a host of events marking New Year as they expand their measures against the virus.

A public health hub has been set up in Heathrow, staffed by a rotating team of seven clinicians working in shifts to support patients on arrival.

One British man, who had travelled to Wuhan to visit his girlfriend, is stuck in the city after his return flight on February 3 was cancelled, and he described trying to get out of the area as “impossible”.

The 29-year-old, who did not want to be named, told the PA news agency: “There have been sporadic warnings from local government in Chinese to tell us that there will be road closures.

“There is no news on when the airport will reopen therefore the airline (China Southern) have just cancelled the flight.

“I’ve also had no help from the UK Embassy in Beijing who are conveniently closed for the weekend.”

England’s chief medical officer Professor Chris Whitty said there was a “fair chance” cases would emerge in Britain as the overall number reported around the world climbed to around 2,000 including 56 deaths, which have all occurred in China.

But he added: “What we don’t know is how far it’s going to spread, that really is something we need to plan for all eventualities.”