Brexit’s cast of characters: How careers of key players changed 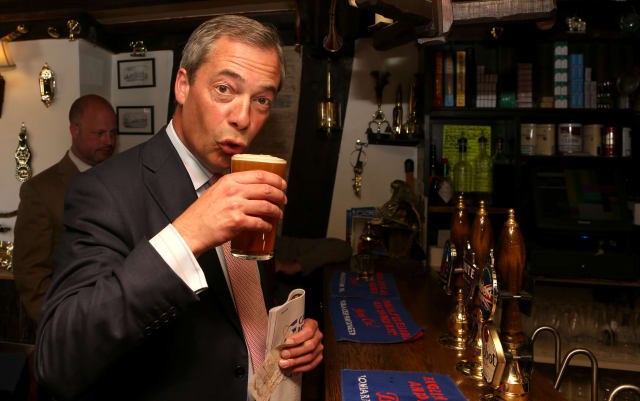 How have the roles of the key players changed on the path to Brexit?

– Boris Johnson: From the EU referendum bus to Number 10

A promise to “get Brexit done” won the Tory leadership for Boris Johnson and ultimately a significant Commons majority, leaving him as the most secure prime minister since Tony Blair.

But for a Prime Minister who is now so deeply associated with the project, his decision to back Brexit in 2016 was by no means certain.

He wrote two different versions of the newspaper column setting out his views on the issue – one reluctantly in favour of remaining, the other backing the Leave cause – before ultimately deciding to throw his weight behind the Brexit campaign.

His decision was a significant boost for the 2016 campaign, giving Vote Leave the high-profile frontman it needed.

A memorable image from the campaign is of Mr Johnson standing next to a bus emblazoned with the false claim that the UK sends £350 million a week to the European Union – a figure branded a “misuse of official statistics” by the watchdog responsible.

After taking office as prime minister, Theresa May made Mr Johnson her foreign secretary – although he resigned in July 2018 over the direction she was taking on Brexit.

He had his sights set on Number 10 throughout his political career, and was unsuccessful in 2016, but in 2019 his dreams came true when he won the Tory leadership contest – facing many challenges as Brexit loomed.

He said he would “rather be dead in a ditch” than ask Brussels for a further Brexit delay, promising repeatedly to get the UK out by October 31.

It was a promise he would break, but used it as the reason to call the general election in December 2019 which saw him romp home with an 80-seat majority.

After that, there was nothing that could prevent him from keeping the new January 31 Brexit day – although that will usher in months of tough negotiations with Brussels about the nature of the UK’s future relationship with the EU.

Dominic Cummings rose to notoriety in politics, first as an adviser to Michael Gove and then as campaign director at the official Brexit group Vote Leave.

He was portrayed by Benedict Cumberbatch in a Channel 4 drama about the Brexit campaign, which played up his role in covering a red bus with the disputed £350 million-a-week figure, arguing that the cash could be used to fund the NHS.

Mr Cummings, a hate figure for many pro-EU politicians, said the £350 million/NHS argument was “necessary to win” the campaign.

Mr Johnson appointed Mr Cummings to his top team as senior adviser at Number 10 when he became Prime Minister in the summer of 2019.

The appointment of the abrasive former campaign director was controversial, given that he was found to be in contempt of Parliament earlier in the year for refusing to give evidence to MPs investigating misinformation.

Mr Cummings has built a reputation as someone who does not play by the rules of conventional politics.

He was once called a “career psychopath” by former prime minister David Cameron, according to widely reported remarks.

But Mr Cummings is no stranger to an insult either, describing David Davis, then the Brexit secretary, as “thick as mince, lazy as a toad and vain as Narcissus” in July 2017.

The December 2019 election victory gave Mr Johnson the political capital he needs to take bold decisions – and Mr Cummings soon set to work on his goal of reshaping Whitehall, issuing a recruitment call for data scientists, economists and “weirdos and misfits with odd skills” to shake up the Civil Service.

– David Cameron: From a promise to a political memoir

As prime minister in 2013, David Cameron promised an in-out referendum on EU membership if the Conservatives won the 2015 general election, and later pledged to campaign with “all my heart and soul” for Britain to vote to Remain.

On the morning on June 24 2016, as the nation was waking up to the news that 52% had voted to leave the EU, Mr Cameron said the Brexit vote was the “will of the British people” and an “instruction which must be delivered” as he announced his intention to resign.

With his voice appearing to break, Mr Cameron said: “I love this country and I feel honoured to have served it.”

After considering his position over the summer, he came to the conclusion that he must quit politics, resigning as an MP.

Ahead of the September 2019 release of his long-awaited book, For The Record, Mr Cameron said he was”truly sorry” for the uncertainty and division that followed the Brexit referendum.

The man who wanted his country back and, after succeeding, his life back, Nigel Farage oversaw the transformation of Ukip from a fringe party to major political force that ultimately helped pressure the Tories into calling the referendum.

Accused of stooping to racist imagery with the infamous “Breaking Point” poster depicting streams of refugees fleeing to the EU, Mr Farage saw his decades-long campaign for Britain to quit Brussels triumph in the 2016 referendum.

In the aftermath of the victory, the leading Brexit campaigner said: “Let June 23 go down in our history as our independence day.”

Not long after the referendum, he decided to step aside as party leader, leaving the national stage as one of the most divisive – and successful – politicians of modern times.

But his political days were not over.

In April 2019, Mr Farage launched the Brexit Party, vowing to lead a fightback against an establishment which he said has betrayed the country over Brexit.

Success at the final European elections of the UK’s membership of the EU was not mirrored at the general election and the party’s campaign was mired in chaos, with Brexit Party candidates ultimately not standing in seats held by the Tories.

– Theresa May: Prime minister who vowed to make a success of Brexit

Although she was signed up to the Remain campaign, Theresa May kept a very low profile during the lead-up to the 2016 vote, earning her a reputation as a “reluctant Remainer”.

The vicar’s daughter became one of the longest-serving home secretaries in modern times, hanging on to the brief which notoriously ruins political careers, for six years.

In July 2016 she took up what would be the toughest challenge of her political career – negotiating Britain’s exit from the European Union in the role of Prime Minister.

She famously said “Brexit means Brexit”, and added “We’re going to make a success out of it”, but it was a rocky road for Mrs May and one that did not end in glory.

After losing a series of votes in the Commons on her Brexit deal, she announced to the 1922 Committee in March 2019 that she would not lead the UK in the next stage of Brexit negotiations, signalling to MPs that she was prepared to sacrifice her premiership in order to get an agreement through.

But it was not enough and in May she confirmed she would resign as party leader and prime minister, saying: “It is and will always remain a matter of deep regret to me that I have not been able to deliver Brexit.”

She broke down as she said it had been “the honour of my life” to serve “the country that I love”.

Her legacy as prime minister will be defined by her fateful decision to call a snap election – losing her majority, leaving her dependent on the Democratic Unionist Party (DUP) and at the mercy of hardline Brexiteers on her own benches.

During her troubled tenure, Mrs May lost more than 30 ministers, most of them quitting over her Brexit plans, saw her keynote policy defeated by a record-breaking 230 votes, and suffered the indignity of having her Government found in contempt of Parliament.

In 2016, George Gideon Oliver Osborne became the youngest chancellor in 120 years when he took on the job, aged 38, following the 2010 general election.

Mr Osborne, the right-hand man of Mr Cameron, outlined the case for a vote to Remain on the European Union campaign trail.

After the referendum result was announced, he said the vote for Brexit was “not the outcome I wanted”, adding that he respected the decision of the British people and “will do all I can to make it work”.

But in July 2016, Mr Osborne was unceremoniously sacked from his job as chancellor by new prime minister Theresa May within hours of her taking office.

Mr Osborne and Mr Cameron were soon spotted nursing their wounds over coffees with their families at a terrace cafe in Notting Hill.

After returning to the Tory backbenches, Mr Osborne announced the launch of a new book which he said was “about the future”, adding: “I want to apply the lessons I’ve learnt in victory and defeat to the urgent challenge of this Age of Unreason.”

He also launched a new think tank to promote the Northern Powerhouse, one of his key policies as chancellor.

The big career move came in March 2017 when he was appointed editor of the London Evening Standard.

The following month, he said he would carry on fighting for an “open, tolerant” Britain as he announced his intention to step down as an MP to focus on his new editor role, which he still holds.

Michael Gove was a top player in one of the biggest political dramas of modern times when, less than a week after the British public voted for Brexit in 2016, he performed a remarkable about-turn, and in doing so stabbed fellow Leave campaigner Boris Johnson in the back.

Mr Gove, who had been expected to back Mr Johnson in his bid to become prime minister, declared that he too would seek to lead the Tories.

The announcement rocked Mr Johnson’s team to the core, as they had fully expected Mr Gove to come down on his side and stand together, as the pair had shown a united front campaigning together on the EU referendum campaign trail.

Mr Gove was not successful in the leadership battle, and lost out again in 2019, but Mr Johnson extended an olive branch to his rival, giving him the post of Chancellor of the Duchy of Lancaster and a key role in Brexit planning.