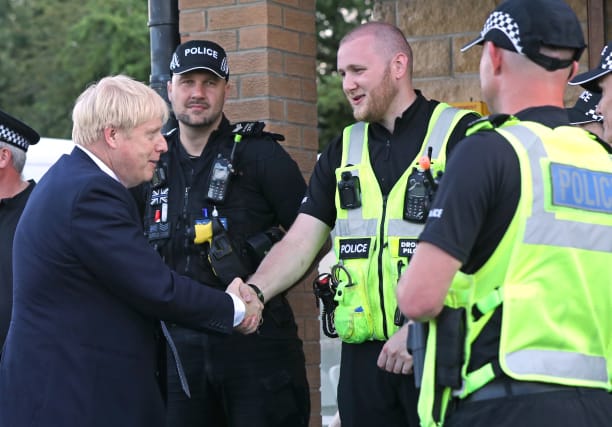 Boris Johnson should hire crack teams of detectives to fight financial crimes – not just “bobbies on the beat” – if he wants to quell street violence, a think tank claims.

The Prime Minister’s 20,000 police officer recruitment drive needs to include job adverts for specialist investigators who will focus on tackling complex economic crime probes as they could be linked to stabbings or funding county lines drugs gangs, according to researchers.

Helena Wood, of the Royal United Services Institute (RUSI), said some of these officers should be “diverted” to focus on such crimes, telling reporters: “No one is making the link between street violence and the money.”

She said a stabbing “at the end of your street” over drugs is “two steps away” from someone breaking the law by moving the cash made from the deals, adding: “I think we need to make that link between someone getting stabbed on the streets of Southwark and the lawyer sat there structuring a company to move that cash.

“The link isn’t made by many of our senior police officers and it needs to come from the top.

Ms Wood, who worked at the National Crime Agency (NCA) and the Treasury before joining RUSI’s centre for financial crime and security studies, said there was a perception that moving illicit funds around “really isn’t hurting anyone”, but she said: “That cash gives the criminals their lifeblood.

“Illicit finance is so integral to organised crime.”

The nature of the threat of financial crimes – like fraud, money laundering and insider trading- is on such a scale, she said, that it should have a policing budget matching that set aside to tackle terrorism, which the Government is raising to £906 million.

Her comments come as a review by ex-deputy Scotland Yard Commissioner Sir Craig Mackey found fraudsters in the UK “currently operate with impunity”, and police have “not kept pace” with the sharp rise in cases.

Ms Wood said the Prime Minister’s commitment to tackling economic crime was yet to be made clear, although it was mentioned in the Queen’s Speech.

It remained to be seen whether the Economic Crime Plan – launched under Theresa May’s premiership to see public and private sectors take action to make sure the country is not abused for such offences – was a priority for the new government, she added, warning that lax regulations meant UK companies were becoming a “vehicle of choice” for money launderers because the information required to set up a company was so minimal.

Ms Wood raised concerns about funding and resources for the National Economic Crime Centre which was set up in a bid to tackle financial crime.

Forces were also “haemorrhaging” economic crime experts – losing them to the banking sector where the pay and conditions were better, she added.

Last year, the police watchdog made similar warnings as it revealed the majority of cyber crimes cases were being closed with no further action being taken and no suspect being identified.

Earlier this month, one of the country’s most senior police bosses, Martin Hewitt, the chairman of the National Police Chiefs’ Council, reportedly warned the recruitment drive would not tackle rising crime rates and falling prosecutions without further investment in the austerity-hit justice system.

Some police and crime commissioners and chief constables have criticised the way in which the numbers of officers are being distributed, claiming there is a “postcode lottery” of provision with a risk that smaller forces may not get their fair share.

While John Apter, national chairman of the Police Federation of England and Wales, told the PA news agency half a million applications would be needed to fill almost 55,000 police officer posts in order to make the plan a success – to also cover those leaving jobs each month.

The Prime Minister plans to lead a committee looking at ways to tackle crime and has told ministers all government departments should consider itself a “criminal justice department” in a drive to tackle the “complex causes of crime” with health, social care, youth services and education reforms.