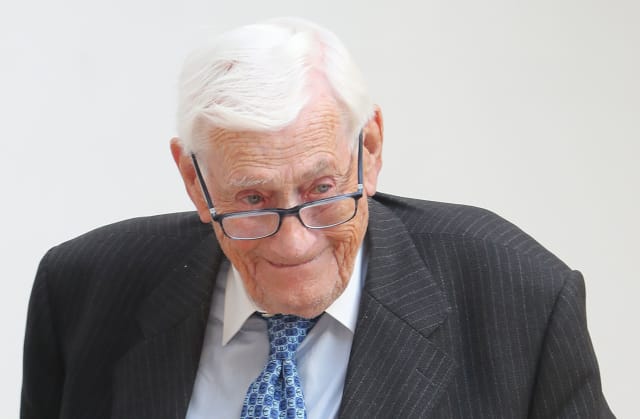 A book of condolence has opened in Belfast after the death of former deputy first minister Seamus Mallon.

Mr Mallon’s death at the age of 83 on Friday has led to an outpouring of gratitude as thousands of people paid tribute to the former SDLP deputy leader.

A book of condolence opened in Belfast City Hall on Saturday, and another will open at the Guildhall in Derry on Sunday.

American actress Sharon Stone was among those to sign the book in Belfast, alongside her friend, the Nobel Peace Prize winner Betty Williams.

Ms Stone called Mr Mallon “a legend, a real warrior of peace” as she signed the book along with hundreds of others, including his party colleagues in the SDLP.

The actress’ message in the book read: “With respect and admiration.”

The ex-deputy leader of the nationalist SDLP was an architect of the Northern Ireland peace process and a key figure in negotiating the 1998 Good Friday Agreement, which largely halted violence.

Former US senator George Mitchell, who was heavily involved in creating the Good Friday Agreement, also paid tribute to Mr Mallon, who was deputy to Lord Trimble at Stormont from 1998 to 2001.

“It’s a great loss for me personally as it is for the people of Northern Ireland,” Mr Mitchell told Q Radio.

“Seamus Mallon was a strong and effective political leader for many decades including the period during which the negotiations were held among all of the parties in Northern Ireland that led to the agreement that brought an end to the violence of the Troubles.”

Former US president Bill Clinton, who was in office at the time of the Good Friday Agreement and championed peace talks in the 1990s, also paid a touching tribute to former Newry and Armagh MP Mr Mallon.

He said: “From his earliest entry into politics, Seamus never wavered from his vision for a shared future where neighbours of all faiths could live in dignity, or from the belief he shared with John Hume and the entire SDLP that non-violence was the only way to reach that goal.

“As his party’s chief negotiator in the talks leading to the Good Friday Agreement, he was respected by all parties for his intelligence and integrity, his candour and convictions.”

Mr Mallon was a former teacher who lived in Markethill, Co Armagh, a largely Protestant town. He is survived by his daughter Orla.