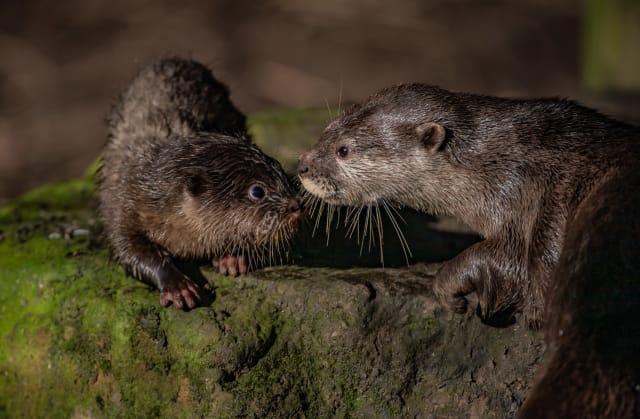 Five otter pups made a splash at Chester Zoo as they enjoyed their first swimming lesson.

It is the first time the unnamed pups have ventured outside their den since being born on November 8 to parents Annie and Wallace – who showed them the ropes in the water.

At two-and-a-half months old, the pups weigh just 500g each and still sport their baby fur, which is not yet fully waterproof.

Chester Zoo is calling for the public to help name the litter – three females and two males.

They are Asian short-clawed otters, which is the smallest of 13 otter species worldwide.

The species is listed as vulnerable to extinction by the International Conservation of Nature, threatened by habitat loss and poaching due to the use of their skin and organs in Chinese medicine.

Chester Zoo’s Hannah Owens said: “Seeing the pups taking their first steps outside and dipping their paws into the water is wonderful.

“Annie and Wallace are experienced parents so with some gentle encouragement, the pups will be gliding through the water in no time.

“For the time being though, until their waterproof coats are fully developed, they’re just dipping their toes in and getting used to being close to water.”

When fully grown, the species, from south-east Asia, has webbed feet, densely-packed waterproof fur and a powerful ruder-like tail.

The animals close their ears and nostrils while swimming and use highly-sensitive whiskers to detect prey such as fish, frogs and crabs – eating up to a quarter of their body weight each day.

Ms Owens added: “Asian short-clawed otters have evolved to be great swimmers. They are the ultimate aquatic animals.”