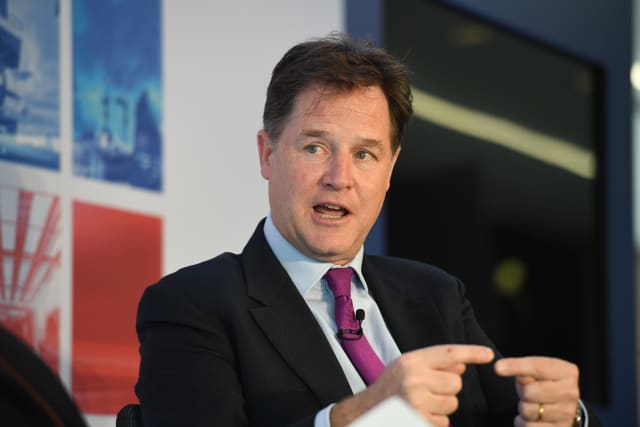 Facebook communications boss Sir Nick Clegg has hit back at suggestions that the social network benefits as a business from allowing controversial or extreme content to appear on its platforms.

The company has been repeatedly accused of failing to adequately police its platform and protect its users, in particular young people, from seeing harmful material.

Critics have suggested that Facebook and other social media sites are profiting from such material through inaction.

But, speaking to BBC Radio 4’s Today programme on the issue, Sir Nick said “no sane human being” would want to expose people to dangerous content.

“The thing I would really question is there is nothing in the business model that lends itself to showing harmful and unpleasant and offensive or dangerous material to anybody,” he said.

“It’s not just the right thing to do in terms of Facebook discharging its social responsibility, and that’s why, as you may know, we’ve significantly changed the rules at Instagram so that graphic material is not shown, other material is clouded out so that you can’t see it.

“We take down material that is reported to us or we find through our automated systems which could lead to self-harm or, even worse, people taking their life.

“But, I’ll be very candid with you, why on earth would Facebook want to put (up) that kind of material? Advertisers, upon whom the business relies, don’t like it at all – of course, no sane human being wants to see young, particularly vulnerable or anguished individuals, exposed to such material.

“I see this over and over again, this assertion which is made without any further examination, that we have somehow a commercial incentive to expose people to unpleasant, hateful, polarising, extreme or even violent material. We have none at all.

“The very people we depend upon for the business are people who pay to place advertisements – the last thing they want is to have their advertisement placed next to that material.”

He admitted that adequately finding and removing all harmful material is not something the company is “completely on top of”, arguing that policing, at scale, a platform used by a third of the world’s population is “a real challenge”.

The former deputy prime minister was also asked about the UK Government’s planned digital service tax on US technology giants and urged Chancellor Sajid Javid to delay plans to introduce it.

He said the UK should pause the plans to work towards an international solution, and did not rule out the suggestion that the proposals could be used as a bargaining chip by the US in transatlantic post-Brexit trade negotiations.

“I totally understand the political significance which is attached to this because people want to see big global companies like Facebook pay their fair share, but actually the solution the Treasury has come up with compared to total tax intake for the Treasury is very, very small indeed.

“I would simply throw the question back and say to Sajid Javid ‘Look, you’re not giving anything up by just saying you want to give the international talks more time to succeed’.”

Also responding to questions about the hacking of Amazon boss Jeff Bezos’s mobile phone by Saudi Arabia via WhatsApp – the messaging platform owned by Facebook – Sir Nick said he is “very, very confident” that the communications service was not breached as part of the attack.

“We’re as sure as you can be that the technology of end-to-end encryption cannot be hacked into,” he said.