‘Avoidable’ death of newborn must be turning point for NHS trust, parents urge 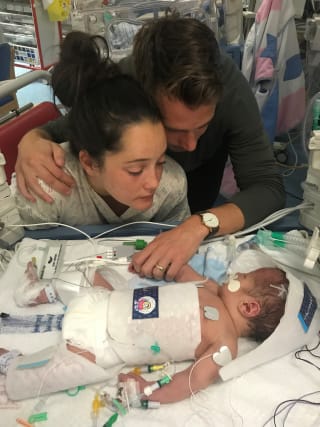 The “wholly avoidable” death of a baby seven days after his emergency delivery should be a “turning point” for the NHS trust involved, his parents have said.

Harry Richford died a week after he was born in November 2017 at the Queen Elizabeth the Queen Mother Hospital in Margate.

Bosses at East Kent Hospitals University NHS Foundation Trust, which runs the hospital, said it was with “great sadness” that they accept failing Harry and his family.

It comes amid reports that at least seven preventable baby deaths may have occurred at the trust since 2016.

At the conclusion of Harry’s inquest on Friday, Coroner Christopher Sutton-Mattocks listed a series of errors he found with the care given at the hospital.

He gave a narrative conclusion that Harry’s death was contributed to by neglect and had been “wholly avoidable”.

Harry’s mother Sarah Richford had been taken to theatre for an emergency Caesarean section on November 2.

He also found that an inexperienced doctor was in charge of the birth, and there was a failure to request support from a consultant earlier.

Following the judgment, Harry’s parents Sarah and Tom Richford criticised the trust, claiming it “tried to avoid outside scrutiny and failed to learn from this and previous similar cases”.

Mr Richford added: “Accidents happen every day, but failing to learn from them appears to have become part of the culture of this NHS trust.”

The Care Quality Commission (CQC) has carried out a no-notice inspection on the trust.

An investigation by the BBC on Thursday found at least seven preventable baby deaths may have occurred at the hospital group.

Mr Richford said: “All of those cases, had they learnt from those cases, we wouldn’t be stood here today because Harry would be alive and well.

“We want this to be the turning point so it does not happen to other families going forward.”

The trust said it has made a number of changes following Harry’s death, including a training programme for staff in identifying and supporting difficult births.

But when Mr Richford was asked about the measures, he said he is not “convinced at present they have the resources and the systems in place today to prevent it”.

He added: “This risk was present from at least as far back as 2014, when the number of serious incidents on maternity were highlighted.

“We have read about Morecambe Bay and Shrewsbury and Telford, and find the similarities to Harry’s case frightening.

“We are calling for the Secretary of State to arrange an independent investigation or inquiry into Harry’s death and maternity services at East Kent.”

Following the inquest, Dr Paul Stevens, medical director at East Kent Hospitals, said in a statement the trust is “so sorry and apologise wholeheartedly for the devastating loss of baby Harry”.

He added: “We cannot imagine the pain the Richford family has endured.

“The lessons we can learn from their continued commitment to understanding the circumstances of Harry’s death will help families in the future.”